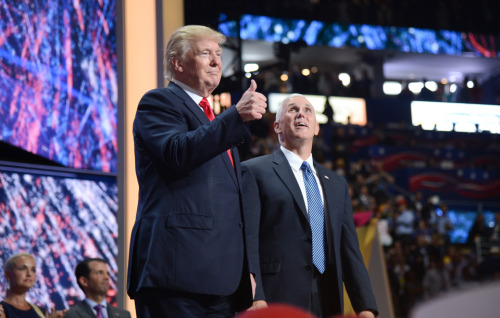 CLEVELAND — Listening to Republican nominee Donald Trump’s acceptance speech this past Thursday night in the Quickens Arena in Cleveland, reminded me of the latest movie “The Purge -Election Year.” In the film as a young girl, the subject Sen. Charlie Roan survived the annual night of lawlessness that took the lives of her family members. As a presidential candidate, Roan is determined to end the yearly tradition of blood lust once and for all but is met with violent opposition from the powers that be which capitalizes on the annual criminal ritual.

Trump personified the forces in the movie who believe they are the only ones who can rid the country of crime and fear, and anyone who opposes them must be stopped. Trump’s speech came across as a “dark” and “pessimistic” villain while others saw his speech as indicative of what they felt all alone – unsafe in a country being dominated by people who don’t look like them. After a bruising and ugly primary season, a traumatized Republican Party came here hoping for a show of unity with the purpose of coalescing around their nominee. The game plan was for the GOP family to talk through its differences, remind itself of what it shares, then head back home with a renewed sense of identity and purpose. Instead, the week laid bare the reality that the GOP of old no longer exists and has become a collection of belligerent and combatant tribes, with no intelligible set of values beyond a burning desire to keep Hillary Clinton out of the White House.

The question many have is whether Donald Trump — with his proposal to build a wall to keep Mexicans out, skepticism of free trade and internationalism, poor record on social issues (abortion, race relations), and insensitivity toward the life experiences of women, minorities and POW Veterans — now temporarily owns the Republican Party. Or has he hijacked it until November.

“The party is in serious trouble and we need to get on message fast,” said Angela Harmon, a Kansas delegate and Tea Party leader attending her first party convention.

Wednesday night’s eruption on the convention floor, when Sen. Ted Cruz (R-Tex.) took the stage and refused to endorse the celebrity billionaire who had bested him in the primary race, was the most dramatic expression of the party’s existential crisis.

On what was supposed to be a victory lap the day after his acceptance speech, Trump was still fixated on the snub by Cruz.

“I don’t want his endorsement,” Trump said during a rambling, disjointed news conference Friday morning. “If he gives it, I won’t accept it.”

Rather than turning his attention to the battle ahead, Trump revisited some of the low points of his primary fight: He defended his retweet of an unflattering picture of Cruz’s wife to his millions of Twitter followers. And he called attention to a false and far-fetched tabloid claim that Cruz’s father might have had a hand in John F. Kennedy’s assassination.

Whatever its artistic merits, the convention had more than its share of dissonant moments.

On Wednesday, however, another African American, Lynne Patton, who runs Eric Trump’s foundation, stood on the same stage and declared: “There’s not one person in this room who can deny that, historically, black lives have mattered less. My life mattered less. And whether we like it or not, there are people out there who still believe this to be true.”

On Thursday, billionaire PayPal co-founder Peter Thiel became the first person ever to proclaim his homosexuality to a GOP convention audience, saying: “I am proud to be gay. I am proud to be a Republican.” During his nomination acceptance speech minutes later, Trump declared that he would protect “LGBTQ citizens,” prompting widespread applause in the hall.

Yet speaking earlier that same night was Tony Perkins, head of the Family Research Council, which argues that the rationale for same-sex marriage could also be used to justify man-horse matrimony. The GOP platform approved this week maintains opposition to same-sex marriage and argues in favor of allowing discrimination against gays for religious reasons.

The rifts extend into foreign policy as well. In an interview with the New York Times, Trump said he would condition assistance to NATO allies on whether the United States was “properly reimbursed” for the cost of its military operations — an abandonment of NATO’s core tenet as a mutual-defense organization.

“I think he’s wrong on that,” Senate Majority Leader Mitch McConnell (R-Ky.) told Politico. “I don’t think that view would be prevalent or held by anybody he might make secretary of state or secretary of defense.

And while the convention approved the party’s most socially conservative platform ever, Trump has played down cultural issues in his campaign and did not mention abortion or God in his acceptance speech.

Even if Trump wins — but especially if he loses — the 2016 convention is likely to be remembered as an early proxy fight for the 2020 primary. The Cruz meltdown, while damaging in the short run, may look in retrospect like a principled stand. Meanwhile, Ohio Gov. John Kasich, another of Trump’s defeated primary opponents, kept an antiseptic distance from the convention proceedings in his own state, maintaining that his sunny brand of conservatism ultimately will prevail.

Throughout the chaotic week, anxiety percolated through the Republican donor class. They were heartened by Trump’s choice of running mate, Indiana Gov. Mike Pence, a popular and familiar figure.

But right now the face of the Republican Party that Lincoln built is now Donald J. Trump.