WASHINGTON — The America Israel Public Affairs Committee (AIPAC) kicked off the start of its three-day conference on May 22, which featured President Barack Obama as the keynote speaker, and by the time it’s over on May 24, AIPAC will be able to boast that it attracted more than 10,000 pro-Israel activists from all 50 states to the Washington, DC Convention Center, the largest in its history.

The theme for this year’s conference was “U.S. and Israel: Better Together.” However, based on the often time rocky relationship the Obama administration has been having lately with the Israeli government over stalled peace talks and the Israeli government’s insistence on building additional settlements in the disputed occupied territory, relations between the two countries is stable but not better. 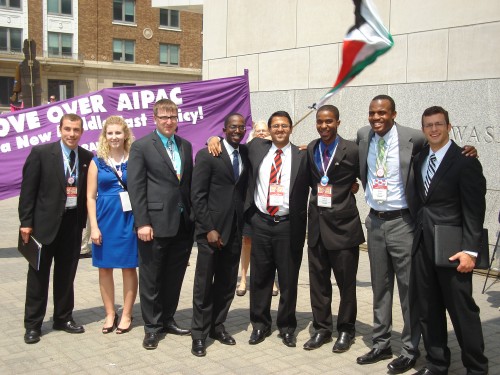 President Obama spoke passionately of his administration’s commitment to support Israel, but stopped short of entering the landmines of discussing openly the subject of illegal settlements and the status of East Jerusalem. His 15-minute address was received warmly and was greeted with three standing ovations at the mention of anything that supported Israel’s diplomatic, economic and military commitments from the U.S.

The president clarified and articulated even further his earlier statements made publicly and privately last week to visiting Israeli Prime Minister Benjamin Netanyahu, who will be the keynote speaker at the annual conference’s dinner on May 23, regarding his insistence that Palestinian Authority President Mahmoud Abbas’ Fatah faction, and Prime Minister Netanyahu’s peace negotiations must acknowledge the 1967 borders as a starting point. But he also emphasized that U.S. commitment to Israel’s security is ‘ironclad.’ That plan was not well-received by Israel’s government. Prime Minister Netanyahu publicly rebuked the 1967 border plan, calling those lines “indefensible,” and will give a spirited defense of the Israeli’s government’s position when he speaks to a joint session of Congress on May 24.

Before President Obama was half-way into his speech, critics were already taking aim at his alleged public swipe at Israel. 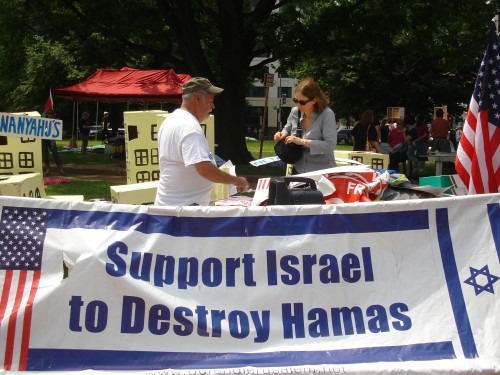 Republicans looking to unseat President Obama charged that he undermined the sensitive and delicate negotiations for Middle East peace with his outline for resumed talks between Israelis and Palestinians. Former Utah Gov. Jon Huntsman said President Obama, whom he served as U.S. ambassador to China until last month, undercut an opportunity for Israelis and Palestinians to build trust. Former House Speaker Newt Gingrich called it “the most dangerous speech ever made by an American president for the survival of Israel,” that he has ever heard.

Former Massachusetts Governor Mitt Romney said President Obama “threw Israel under the bus” and handed the Palestinians a victory even before negotiations between the parties could resume. While tempers were subdued inside the Washington Convention Center ballroom where the president spoke, no such thing was occurring outside in front of the convention center.

Close to 300 protesters advocating an end to foreign aid to Israel, to advocating support for Israel were readily available to add more realism to the great divide in the U.S. over how much, if any, financial support Israel should receive from American taxpayers.

Rabbi Havi Goldberg, 62, of Greenwich, CT, who was demonstrating, as he tells it “ to let the American people know that all Jews do not think alike – we are different just like Anglos don’t agree on the same ticket.” Rabbi Goldberg stated that the public debate the president and the prime minister are having is “a good thing because it made clear that Obama can’t expect Netanyahu to simply agree with him and vice versa.”

Minnie Robertson, 42, an Evangelical Christian from Charlotte, NC, was busy passing out flyers, which read: “If You Really Care About Israel Surviving, Vote Obama Out of Office in 2012!” Robertson says she is “sick and tired of Obama’s arrogance” when it comes to this country’s support for a “loyal and reliable ally as Israel.”

Speaking in her high-pitch voice and without any hesitations, Robertson passionately defended her position: “It is not God’s will for a Palestinian state to be created. All of the land Israel occupied in the 1967 War belongs to Israel…and they should not be forced to give up anything to supporters of terrorists,”

There were a group of Hasidic Jews from Brooklyn, New York, who were holding up a banner condemning the Jewish state for occupying and mistreating the Palestinian people. In addition, there were Jewish groups represented who defended Israel’s right to exist and defend itself by any means necessary.

“Let me see if I got this straight…you tell me…if someone is firing rockets into your cities and kill men, women, and children as Hamas has done over the years, wouldn’t Israel be foolish not to retaliate,” asked Rebecca Horovitz, 57, an Israeli nationalist who lives in a settlement in one of the occupied territories. “We will use whatever means at our disposal to defend the homeland…even our very lives,” she stated.

The Israeli government was relieved to hear President Obama state in his AIPAC address that his administration will block any attempts to recognize an independent Palestinian state at the United Nations General Assembly in September 2011. For the U.S. not to commit to such action would have left Israel with no bargaining positions with the Palestinian Authority.

AIPAC and its powerful allies in some of America’s most influential evangelical churches and organizations, right-wing think tanks, the Israeli diplomatic corps, and allies on Capitol Hill, will make sure President Obama keeps his promises and commitments, which Israel considers vital to its national interests and survival.

Danny R. Johnson is a freelance journalist based in Washington, DC