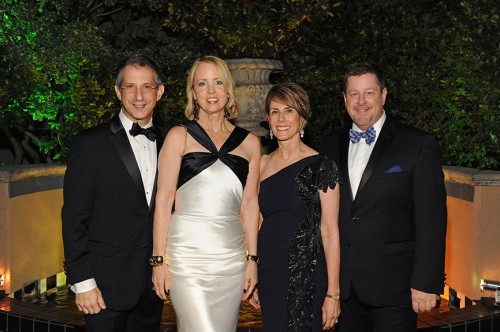 SAN DIEGO–The Old Globe’s 2013 Gala, “A Magical Evening,” netted more than $1 million for the theater’s artistic and educational activities. Co-chaired by Nina Doede and Sheryl White, the black tie event was held on Sept. 21 on the Globe’s historic campus in Balboa Park.

“On behalf of the Board of Directors, I thank our friends in the San Diego community for their outpouring of support for The Old Globe,” said Board Chair Hal Fuson. “The collective efforts of hundreds of people go into making the Globe Gala a success, and we are grateful for their generous contributions and hard work. I would especially like to thank our Gala Co-Chairs – Sheryl White and Nina Doede – for their incredible commitment, enthusiasm and leadership.”

The evening began with cocktails and a silent auction held on the Globe’s Copley Plaza, which was aglow as the late summer sun set over San Diego. Guests were welcomed by the Gala Co-Chairs, along with Artistic Director Barry Edelstein and Managing Director Michael G. Murphy, and bid on over 150 enticing items as they mingled on the plaza’s grand entrance.

Following the reception, Gala guests entered the Old Globe Theatre, part of the Conrad Preybs Theatre Center, for an exclusive concert of songs on the Donald and Darlene Shiley Stage by cast members from The Last Goodbye, the Globe’s new musical fusing Romeo and Juliet with the music of Jeff Buckley. Cast members performed beautiful renditions of some of the iconic Jeff Buckley songs from the show, including “Hallelujah,” as well as other classics such as “Fly Me to the Moon” and “Fields of Gold.”

After the performance, guests exited the theater directly onto Copley Plaza, which was transformed into a sophisticated, intimate ballroom. Luxurious black and red linens were resplendent with glittering metallic tableware and centerpieces featuring lush red and white roses encircled by swirls of gleaming silver. The sumptuous sit-down dinner, catered by Sheraton San Diego Hotel and Marina, began with Ripe Heirloom Tomato and Burrata Salad and Freshly Baked La Brea Artisan Breads, followed by entrées of Basil Parmesan-Crusted Alaskan Cod, Roasted Beef Tenderloin and Roasted Vegetable Risotto. The decadent meal ended with Black Forest Ice Cream Oreo Cake and a Dessert Bar. The dinner was complemented with a selection of wines, including 2009 GEN 7 Santa Barbara County Chardonnay “Reserve” and 2009 GEN 7 Cabernet Sauvignon “Reserve.” Gala guests then danced into the night to the lively music of The Cowling Band on the Copley Plaza dance floor under the dazzling light of a grand chandelier.

The Old Globe is located in San Diego’s Balboa Park at 1363 Old Globe Way. There is free parking lots available throughout the park. For additional parking information, visit www.BalboaPark.org.