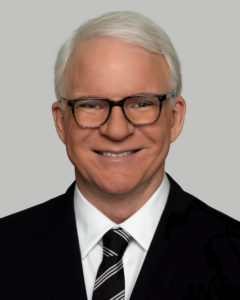 The 6 p.m. chat between Erna Finci Viterbi Artistic Director Barry Edelstein and playwright/renaissance man Steve Martin, will be held in conjunction with the world premiere of Martin’s new play Meteor Shower, an adult comedy. Meteor Shower marks his welcome return to the Globe following the great success of Bright Star, and continuing his exciting and fruitful relationship with The Old Globe.

Martin and Edie Brickell’s musical Bright Star premiered at the Globe in 2014, played a limited engagement at The Kennedy Center, and received acclaim in its Broadway run at the Cort Theatre. In addition to five Tony Award nominations, Bright Star received Outstanding New Broadway Musical and Outstanding New Score at the Outer Critics Circle Awards. And next February, as part of the 2016-2017 Season, the Globe will mount a production of Martin’s international hit comedy Picasso at the Lapin Agile, directed by the Globe’s very own Barry Edelstein.

Barry Edelstein In Conversation with Steve Martin will take place on the Donald and Darlene Shiley Stage in the Old Globe Theatre, part of the Conrad Prebys Theatre Center. Tickets will go on sale to subscribers only on Tuesday, July 19 at 12 noon, and to the general public on Tuesday, July 26 at 12 noon. Tickets are $20 for subscribers and full-time students and $25 for general audiences, and can be purchased online at www.TheOldGlobe.org, by phone at (619) 23-GLOBE, or by visiting the Box Office at 1363 Old Globe Way in Balboa Park.

“Steve Martin’s return to The Old Globe with this hugely funny and very insightful play is happy news,” said Erna Finci Viterbi Artistic Director Barry Edelstein. “That our audience will have the opportunity to learn more about Meteor Shower through this special chance to hear Steve talk about his work is an extra delight. I look forward to sharing with the community a pleasure I’ve come to value very deeply: that of listening to this unique artist and thinker as he shares insights into his creative process.”

Steve Martin began his career on “The Smothers Brothers Comedy Hour” (1967-1969), for which he earned his first Emmy Award for Outstanding Writing Achievement in Comedy, Variety or Music in 1969. In the mid-1970s, Martin shone as a stand-up on “The Tonight Show Starring Johnny Carson” and NBC’s “Saturday Night Live.” Martin’s films are widely popular successes and are the kind of movies that are viewed again and again: The Jerk (1979), Planes, Trains & Automobiles (1987), Roxanne (1987), Parenthood (1989), L.A. Story (1991), Father of the Bride (1991), and Bowfinger (1999). As an author, Martin’s work includes the novel An Object of Beauty; the play Picasso at the Lapin Agile; a collection of comic pieces, Pure Drivel; a bestselling novella, Shopgirl; and his memoir, Born Standing Up. His writing has also appeared in The New Yorker. Martin is an accomplished, Grammy Award-winning, boundary-pushing bluegrass banjoist and composer who has won three Grammys for performing and composing. He has earned numerous honors including an Academy Award, five Grammy Awards, an Emmy Award, the Mark Twain Prize, and the Kennedy Center Honor. Martin and Edie Brickell’s musical Bright Star premiered at The Old Globe in summer 2015, played a limited engagement at The Kennedy Center, and received acclaim in its Broadway run at the Cort Theatre. In addition to five Tony Award nominations, Bright Star received Outstanding New Broadway Musical and Outstanding New Score at the Outer Critics Circle Awards.

Old Globe Erna Finci Viterbi Artistic Director Barry Edelstein is a stage director, producer, author, and educator. Widely recognized as one of the leading American authorities on the works of Shakespeare, he has directed nearly half of the Bard’s plays. His Globe directing credits include The Winter’s Tale; Othello; and the West Coast premiere of novelist Nathan Englander’s play The Twenty-seventh Man, and the world premiere of Michael John LaChiusa’s and Sybille Pearson’s Rain. He also directed All’s Well That Ends Well as the inaugural production of Globe for All, which tours the works of Shakespeare to diverse communities throughout San Diego County. As Director of the Shakespeare Initiative at The Public Theater (2008-2012), Edelstein oversaw all of the company’s Shakespearean productions, as well as its extensive educational, community outreach, and artist-training programs. At The Public, he staged the world premiere of The Twenty-seventh Man Julius Caesar, The Merchant of Venice, Timon of Athens and Steve Martin’s WASP and Other Plays. He was also Associate Producer of The Public’s Broadway production of The Merchant of Venice starring Al Pacino. From 1998-2003 he was Artistic Director of Classic Stage Company. Edelstein’s other Shakespearean directorial credits include The Winter’s Tale at Classic Stage Company, As You Like It starring Gwyneth Paltrow, and Richard III starring John Turturro. Additional credits include the Lucille Lortel Award-winning revival of Arthur Miller’s All My Sons; the world premiere of Steve Martin’s The Underpants, which he commissioned; and Molière’s The Misanthrope starring Uma Thurman in her stage debut. Edelstein has taught Shakespearean acting at The Juilliard School, NYU’s Graduate Acting Program, and the University of Southern California. His book Thinking Shakespeare is the standard text on American Shakespearean acting. He is also the author of Bardisms: Shakespeare for All Occasions.

Meteor Shower will be directed by Gordon Edelstein in a co-production with Long Wharf Theatre, where Edelstein serves as Artistic Director (and no, he is not related to Barry), and will play July 30 to September 11 with opening night on August 7, in the Sheryl and Harvey White Theatre, part of the Conrad Prebys Theatre Center. Single tickets begin at $39 and are on sale to the general public now. Many performances throughout the engagement are already nearly sold out. As part of Long Wharf Theatre’s 2016-2017 Season, their performances are scheduled for September 21 to October 16 (dates subject to change).

Get ready for the unexpected when Norm and his wife Corky invite another couple to their Ojai backyard to watch a meteor shower in the night sky. As the stars come out and the conversation gets rolling, cocktails flow, tempers flare, and sparks fly—literally. Steve Martin’s surprising new comedy takes an offbeat and absurdist look at the comic anxiety lurking just beneath the surface of modern marriage.

Meteor Shower features Jenna Fischer (Emmy Award nominee as Pam Beesly on “The Office,” Walk Hard: The Dewey Cox Story, Reasons to Be Happy Off Broadway) as Corky, Greg Germann (SAG Award winner for “Ally McBeal,” “Once Upon a Time,” Broadway’s Boeing-Boeing, original production of Assassins) as Norm, Alexandra Henrikson (Fish in the Dark and The Snow Geese on Broadway, Helen Hayes Award nominee for Ironbound, “Funny Or Die”) as Laura, and Josh Stamberg (“The Affair,” “Parenthood,” and “Drop Dead Diva,” Off Broadway’s Distracted) as Gerald.

The Old Globe is located in San Diego’s Balboa Park at 1363 Old Globe Way. There are numerous free parking lots available throughout the park. Guests may also be dropped off in front of the Mingei International Museum. The Balboa Park valet is also available during performances ($12), located in front of the Japanese Friendship Garden. For additional parking information visit www.BalboaPark.org. For directions and up-to-date information, visit www.TheOldGlobe.org/Directions.