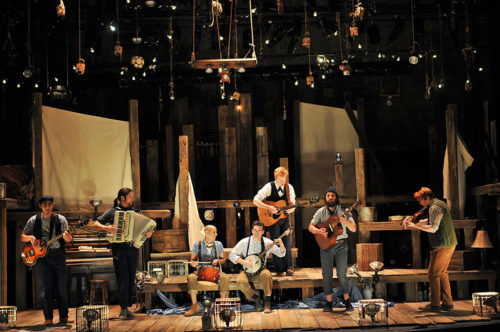 SAN DIEGO–Performances begin this Saturday at The Old Globe for the West Coast premiere of The Old Man and The Old Moon by acclaimed theatre troupe PigPen Theatre Company.

Directed by PigPen Theatre Company and Stuart Carden in their Globe debuts, this intriguing and inventive tale full of music and puppetry runs through June 18 on the Donald and Darlene Shiley Stage in the Old Globe Theatre, part of the Conrad Prebys Theatre Center.

“This show, and the marvelous artists of PigPen Theatre Co., bring sheer magic to our stage,” said Erna Finci Viterbi Artistic Director Barry Edelstein. “PigPen’s signature combination of music, shadowplay, puppetry, and thrilling physical acting is unique. These hip and talented wizards have fused their many gifts into a play that’s a great joy for audiences of all ages. I can’t wait to bring my own five-year-old and nine-year-old, and I can’t wait to watch our adult audiences unleash their inner children before this charming, funny, and incredibly sweet show. I’m delighted to have it here.”

Carden shares this epic story in his debut at The Old Globe. His recent credits include The Miraculous Journey of Edward Tulane (People’s Light & Theatre Company, Chicago Children’s Theatre), Marco Ramirez’s The Royale (City Theatre, The Repertory Theatre of St. Louis), and PigPen Theatre Co.’s indie–folk ghost story The Hunter and The Bear (Writers Theatre). His other credits include The Old Man and The Old Moon (ArtsEmerson, The New Victory Theater, Williamstown Theatre Festival, Writers Theatre), Death of a Streetcar Named Virginia Woolf: A Parody, Yellow Moon, Hesperia, and Travels with my Aunt (Writers Theatre), Oblivion, Tribes, Blackbird, Mary’s Wedding, A Picasso, and The Moonlight Room (City Theatre), Circle Mirror Transformation, In the Next Room or the vibrator play, Crime and Punishment, and The Lieutenant of Inishmore (The Repertory Theatre of St. Louis), Butler (Northlight Theatre), Tribes (Philadelphia Theatre Company), The Pillowman, The Lieutenant of Inishmore, The False Servant, and Stones in His Pockets (Pittsburgh Irish and Classical Theatre), and The Merchant of Venice, Golden Child, Back of the Throat, and Ten Acrobats in an Amazing Leap of Faith (Silk Road Rising).

Carden served five seasons as Associate Artistic Director at Writers Theatre in Chicago (2009–2014) and two seasons at City Theatre (2007–2009). He lives in the South Loop of Chicago with his wife, contemporary art curator Neysa Page-Lieberman, and their twins, Dashiell and Griffin. He is an alumnus of Carnegie Mellon University and a member of the Stage Directors and Choreographers Society.

Through a special arrangement with the San Diego Zoo, Old Globe evening ticket-holders have the opportunity to pre-purchase valet parking in the Zoo’s employee parking structure. With a drop-off point just a short walk to the Globe, theatregoers may purchase fast, easy, convenient valet parking for just $20 per vehicle per evening. Pre-paid only, available only by phone through the Old Globe Box Office. Call (619) 234-5623 or visit www.theoldglobe.org/plan-your visit/directions–parking/valet-parking.

There are free parking lots available throughout the park. Guests may also be dropped off in front of the Mingei International Museum. The Balboa Park valet is also available during performances, located in front of the Japanese Friendship Garden.