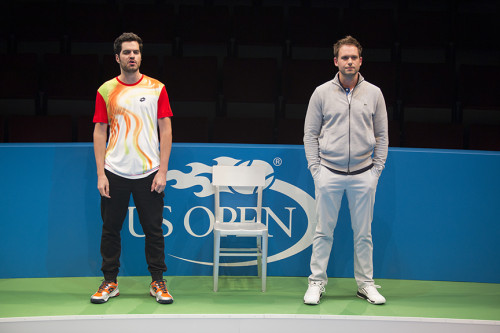 (From left) Alex Mickiewicz as Sergei and Patrick J. Adams as Tim in the world premiere of Anna Ziegler’s The Last Match at The Old Globe. Photo by Jim Cox.

SAN DIEGO–The world of tennis serves as the backdrop in The Old Globe’s premiere of Anna Ziegler’s “The Match.”

Directed by Gaye Taylor Upchurch, “The Last Match” plot takes place at the US Open tennis semifinals. As Russian phenom Sergei Sergeyev and American superstar Tim Porter do battle under the lights on center court, Galina and Mallory, the funny and complicated women who share their lives, watch anxiously from the sidelines. But as the back-and-forth action unfolds, the play journey into the minds of the players and the lives of the two couples in a fast-paced and moving exploration of family, parenthood, and the legacy left behind. Before it’s game, set, and match, more than a championship will be won or lost. Developed in the Globe’s 2014 New Voices Festival, Anna Ziegler’s energetic new play is a funny and visceral look at the sacrifices people make to stay on top.

The March 13 performance will be held at the Sheryl and Harvey White Theatre Conrad Prebys Theatre Center, 1363 Old Globe Way in Balboa Park. Free parking is available throughout the park. Valet parking is also available for $12.