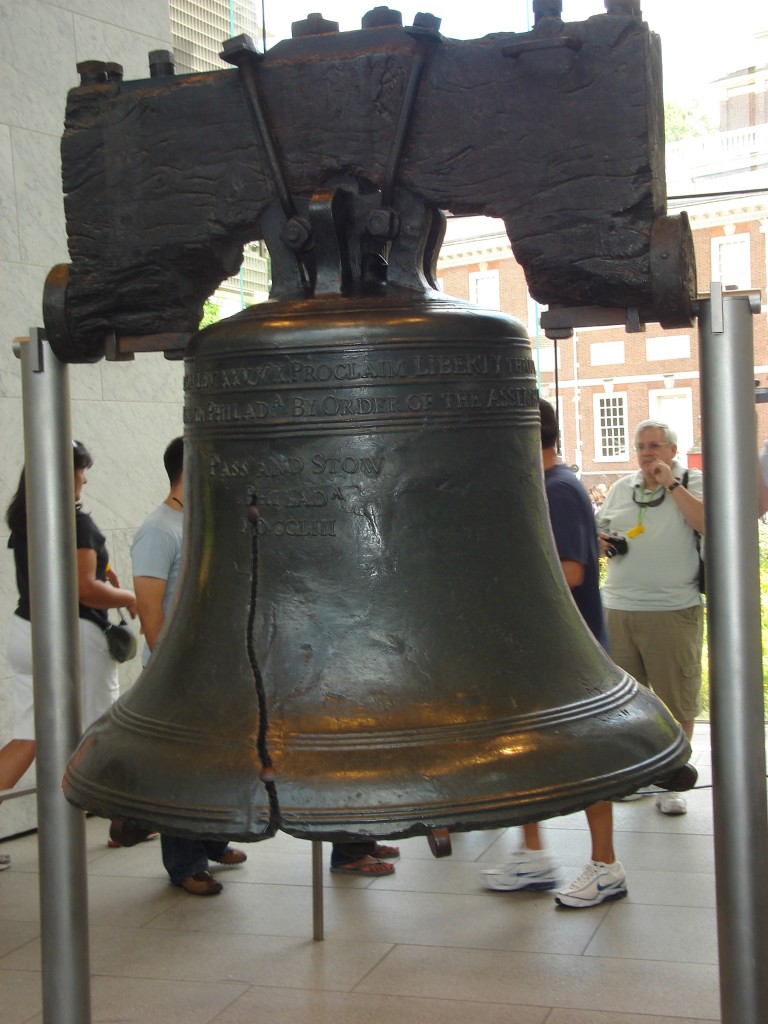 The Liberty Bell, which is housed in Independence Hall, Philadelphia, Pennsylvania, is an enduring symbol of the sacrifices of America’s veterans and the men and women who wear the uniform.

On a blistering and hot summer day in July 2009, I took a leisurely drive from Washington, D.C. on the I-95 to Philadelphia, Pennsylvania to pay a visit to Independence Hall. When I arrived, I, along with thousands of other visitors, had to endure the sweltering humidity and stand in long lines waiting to enter buildings which housed some of the most pristine and sacred symbols of American history. Upon my entrance into Independence Hall – there she was – that majestic symbol and icon of liberty and justice, The Liberty Bell.

The first line of inscription on the Liberty Bell reads: “Proclaim LIBERTY throughout all the Land unto all the Inhabitants thereof…Lev. XXV X (Leviticus 25:10).” As I read the words ever so slowly, I could not help but be reminded of the fascinating history of The Liberty Bell, which was also known as the Independence Bell, and the Old Yankee Bell until 1837 when it was adopted by the Philadelphia abolitionist movement. Ever since its arrival to the British colony of Pennsylvania from France in September 1752, The Liberty Bell became one of the most enduring symbols of America’s independence.

The Liberty Bell and Memorial Day

President Abraham Lincoln in his famous and poignant address at the dedication of the Gettysburg Veterans Cemetery stated these eloquent words: “…Fourscores and seven years ago our fathers brought forth on this continent, a new nation, conceived in Liberty, and dedicated to the proposition that all men are created equal.” It was at this pivotal moment in the nation’s history that President Lincoln was able to reflect on the purpose why the Union was fighting the Civil War – to preserve the Union and preserve the true meaning of Liberty as envision by America’s founding fathers. No president since Lincoln had to deal with such agonizing and pressing issues than preserving the Union.

The Liberty Bell is a perfect symbol of the endurance, dedication, and sacrifices by which all of America’s veterans gave their lives for. The United States of America has been involved in 12 conflicts since its founding: The American Revolution, War of 1812, Mexican-American War, The Civil War, Spanish-American War, World War I, World War II, Korean War, Vietnam War, Desert Storm, Operation Enduring Freedom, and Iraqi Freedom. More Americans died in the Civil War than in all wars since 1775. But there is something about that old Liberty Bell that seems to ring an eternal message and theme in the hearts of men and women throughout the centuries – a longing to be free and the Liberty to set one’s own destiny. This is one of the enduring passions that have carried thousands of men and women into battle.

Memorial Day and The Liberty Bell are sacrosanct for the two represents the bulwark of what it means to be an American. My father was a World War II U.S. Marine veteran who participated in the successful campaign to liberate Europe from the stranglehold of Nazi Germany. During his three years in the Marines, my father endured racial slurs and inhumane treatment I can’t even describe in this article. These inhumanities did not occur at the hands of the Germans, they were committed by the very commanders and fellow Marines of his own company. Nevertheless, my father persevered and served his country with honor and pride with the belief that the injustices he was being served while in the Marines, was nothing compared with the freedom he was helping to usher in Europe! When my father, and the thousands of other Black veterans like him, returned home to Vicksburg, Mississippi and dozens of other small towns and cities across America, he didn’t get a parade and greeted as a hero. He was shunned and looked upon as worthless by the whites who control the power structure. My father could not get a decent job to support his family, which forced him to travel to other parts of the country to look for work.

By the time I caught up with my father before he died in September 1996, he had suffered two strokes brought on from years of drinking and reliving the horrors he saw in battle, which he never could fully share with his children. I served in the U.S. Army for three years, and my two older brothers also served in the U.S. Army with honor and distinction. One of the great enduring symbols of The Liberty Bell is that it has endured and persevered throughout the ages no matter what obstacles stood in its way.

I, along with millions of people around the world, pray for the day when there will be no need for wars and all the suffering it brings. We must all strive to advocate PEACE and work to prevent unnecessary wars if all possible.

Memorial Day is a time to remember all of our fallen heroes who died so that we may remain free. The challenge and duty of all living veterans and every U.S. Citizen is this: Stand Strong and Never Forget the Sacrifices of the Men and Women Who Wear the Uniform.

Danny R. Johnson is a Freelance Journalist based in Washington, D.C.