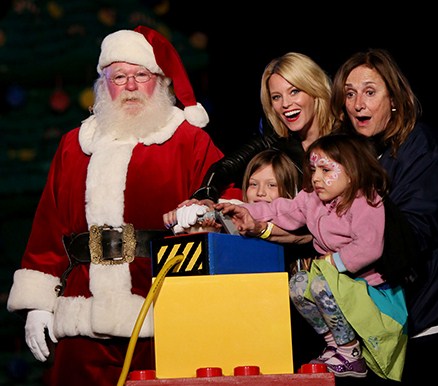 Banks, a mother of two, stars as the voice of “Wyldstyle” in “The LEGO Movie” being released on February 7, 2014, and currently stars as Effie Trinket in the hit movie, “The Hunger Games: Catching Fire.” At the ceremony, Banks presented a check from Legoland California Resort for $10,000 to LA’s BEST (Better Educated Students for Tomorrow) which provides a safe and supervised after school education, enrichment and recreation program for elementary school children ages 5 to 12 in the City of Los Angeles.

“Thank you to Legoland California Resort for having me here today, I’m really excited to light this tree for you all and get the holiday season started,” said Banks. “I am so excited about ‘The LEGO Movie’ coming out February 7 and I loved being able to bring Wyldstyle to life! She’s a kick-butt, really empowering, super cool, action heroine.”

Fireworks lit up the sky, snow fell from the rooftops of Fun Town and more than 11,000 LED lights illuminated the 30-foot tall Christmas tree after Banks and Santa pulled the switch to light the tree. President and CEO of LA’s BEST Carla Sanger and her two granddaughters, Zada Sanger (8) and Liliana Sanger (4) , were also on stage to help light the tree that is created out of more than 245,000 forest green DUPLO® bricks and is adorned with more than 400 LEGO®ornaments.

“What a spectacular day and evening for LA’s BEST,” said Sanger. “I want to tell you all I think Legoland California Resort is as much about learning as it is about fun.”

Guests at the ceremony were treated to a special trailer of “The LEGO Movie” and witnessed the unveiling of the theme park’s newest LEGO costume characters “Emmet” and “Wyldstyle” based on the two lead characters from the movie.  The first full-length theatrical LEGO adventure, “The LEGO Movie” is an original 3D computer animated story that follows Emmet, an ordinary, rules-following, perfectly average LEGO minifigure who is mistakenly identified as the most extraordinary person and the key to saving the world.  He is drafted into a fellowship of strangers on an epic quest to stop an evil tyrant, a journey for which Emmet is hopelessly and hilariously underprepared.