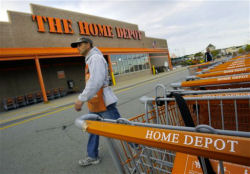 “As expected, second-quarter sales reflected the pull forward of seasonal activity into the first quarter. But we saw continued demand for core products and delivered second-quarter earnings above our expectations,” said Frank Blake, chairman & CEO. “I would like to thank our associates for their hard work and commitment to our customers.”

The company confirmed that it expects fiscal 2012 sales will be up approximately 4.6 percent from the prior year on a 53-week basis.

Based on its year-to-date performance, The Home Depot  raised its fiscal 2012 diluted earnings-per-share guidance and now expects diluted earnings per share to be up approximately 19 percent to $2.95 for the year. This earnings-per-share guidance includes the benefit of the Company’s year-to-date share repurchases and the company’s intent to repurchase $1.4 billion in additional shares over the remainder of the year.

At the end of the second quarter, the company operated a total of 2,255 retail stores in all 50 states, the District of Columbia, Puerto Rico, U.S. Virgin Islands, Guam, 10 Canadian provinces, Mexico and China. The Company employs more than 300,000 associates.