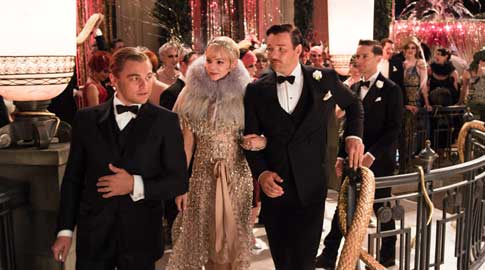 BURBANK–Baz Luhrmann’s lavish adaptation of F. Scott Fitzgerald’s great American novel, “The Great Gatsby,” has crossed the $100 million mark at the domestic box office after only 14 days in release.

In addition, the film opened at the top of the international box office, taking in $43 million in 49 territories and scoring the number one spot in the key markets of France, Italy, Spain, Germany, Russia and Taiwan.

The international cumulative gross now stands at an estimated $64.4 million, with major markets such as Australia, Mexico, Brazil and Japan yet to open. The worldwide total box office now stands at an impressive $165.1 million and counting.

One of the most anticipated films of the year, “The Great Gatsby” has emerged as a worldwide counter-programming phenomenon in the highly competitive early summer corridor. Audiences have embraced the drama, the immersive 3D spectacle, and the eclectic music of the film, resulting in strong word of mouth and repeat viewings.

“Just as the book has been beloved by readers for generations, Baz Luhrmann’s ‘The Great Gatsby’ has already become a favorite of moviegoers,” Fellman stated. “We all congratulate Baz and his amazing cast and crew on the success of the film, which will continue to enjoy the lucrative summer play time.”

“The strength of the international opening is a testament to Baz Luhrmann and everyone involved in the film. The movie’s spectacular Cannes launch truly set the stage for the summer of ‘Gatsby’ around the world,” Kwan Vandenberg said.

“We had the benefit of a wonderful collaboration with this extraordinary director and his cast and team,” Sue Kroll, Warner Bros. Pictures President of Worldwide Marketing, noted. “The film Baz put together, with its modern yet timeless feel, including its surprising musical mix, gave us all the elements we needed to create a pervasive and evocative marketing campaign that has resonated with audiences everywhere.”

From the uniquely imaginative mind of writer/producer/director Baz Luhrmann comes the new big screen adaptation of F. Scott Fitzgerald’s novel “The Great Gatsby.” In his adaptation, the filmmaker combines his distinctive visual, sonic, and storytelling styles in 3 Dimensions, weaving a Jazz Age cocktail faithful to Fitzgerald’s text and relevant to now. Leonardo DiCaprio stars in the title role.

“The Great Gatsby” follows would-be writer Nick Carraway as he leaves the Midwest and comes to New York City in the spring of 1922, an era of loosening morals, glittering jazz, bootleg kings, and sky-rocketing stocks. Chasing his own American Dream, Nick lands next door to a mysterious, party-giving millionaire, Jay Gatsby, and across the bay from his cousin, Daisy, and her philandering, blue-blooded husband, Tom Buchanan. It is thus that Nick is drawn into the captivating world of the super rich, their illusions, loves and deceits. As Nick bears witness, within and without of the world he inhabits, he pens a tale of impossible love, incorruptible dreams and high-octane tragedy, and holds a mirror to our own modern times and struggles.

Two-time Academy Award-winning production and costume designer Catherine Martin (“Moulin Rouge!”) designed the film, as well as produced. The director of photography is Simon Duggan, and the editors are Matt Villa, Jason Ballantine and Jonathan Redmond. The music is by Craig Armstrong, with Anton Monsted serving as executive music supervisor and co-producer.

This film has been rated PG-13 by the MPAA for some violent images, sexual content, smoking, partying and brief language.