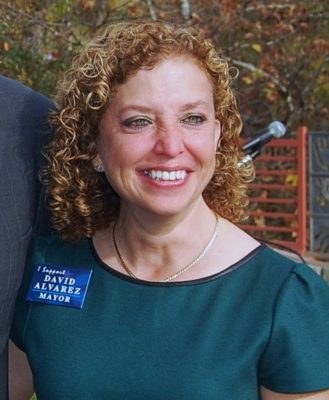 Wasserman Schultz’s announcement Sunday follows a firestorm over Wikileaks hacked emails suggesting the Democratic National Committee favored Hillary Clinton during the primary, despite pledging neutrality. The leaked emails prompted primary runner-up Bernie Sanders to call for Wasserman Schultz’s immediate resignation. Stepping in temporary to fill the void will be former DNC chairwoman, Donna Brazile. And the Bernie Sanders supporters are not at all happy about her taking the helm either.

What is remarkable about the Sanders supporters as they convene for the Monday opening of the DNC is how unremarkable they were able to make it to this point. Sanders received over 13 million votes during the primary and he’s letting everybody know – “we’re not going anywhere!” The convention hall will be electrified with “Bernies” demanding a greater share of the Democratic establishment pie of goodies and influences. In one of the most fascinatingly improbable assemblages in the history of American politics, the young are everywhere. One survey shows 18% of the delegates under 30 (v. only 2.6% in 1968 and 20% in 1972), and Clinton still has the lion share of the delegates. Bernie Sanders is thus a symbol of an astonishing new force in the Democratic Party: the call for young politicians coming of age reigniting the young people’s movement of the 1960s and 1970s. It is a force that may save–or devour–the Democrats of today who tend to be older 50 plus and baby boomers. It may galvanize the election–or the defeat–of Hillary Clinton’s quest to defeat Donald Trump. It contains the potential for a struggle that may make the issue of Philadelphia even larger than the selection of a candidate.

What is at stake is the Democratic Party’s future and its political soul.

The battle lines are clearly drawn. The Sanders young can argue with considerable justice that America’s alienated youth were invited to work within the system as President, and then candidate, Barack Obama led in 2008 and 2012, and they did. Armed with the reform rules that Sanders helped to formulate, the young legions this year shattered political assumptions and shut down party machines that had been grinding on for decades. Through New Hampshire’s bitter months, through the endlessly tedious precinct caucuses and state conventions, they texted, used social medias brilliantly, telephoned and pounded door to door, living on packed sandwiches and granola bars and spending their nights in sleeping bags on someone else’s living-room floor. Their numbers grew with success; duty became dream became destiny; the impossible turned possible turned probable. Often with scant direction or help from the candidate himself, they built from the ground up the best political organization in the U.S. today.

The party’s old guard does not deny that the new young pols beat them half-way at their own game, but that does not keep them from resenting it—sometimes bitterly and unfairly. The list of party veterans and major officeholders who were shoved out of their delegate seats in Philly reads like a who’s who of the Democrats. Many of the old guard Democrats see Sanders as a threat to what they have spent decades building and came through politics and worked their way up. They contend that they didn’t do it overnight. They look at the kids in Philly who will be there to make some noise, and that’ll be the end of it – so they say. Beyond the anguish of power lost, however, many pros contend that they still know best what is good for the party and the country–and Sanders is not it. Or so it seemed to them before Philadelphia. Later, with the campaign ahead and Trump as the common enemy, some measure of party unity might become possible.

When Clinton accepts her party’s nomination on Thursday, she may find that Bernie’s young followers have higher and more doctrinaire expectations than any politician could sanely cope with. Political novices tend to forget that men and women seeking office traffic in promises that older, more cynical voters routinely expect will be ignored.

Whatever the future, the young, by their sheer numbers and in the galvanic example of the Sanders campaign, have profoundly altered the chemistry of American politics. Committed, surprisingly professional and potentially volatile, they are a huge, insistent presence in the Democratic Party, as irritating in the political family as a suddenly mature prodigy who has aggressive manners and uncomfortable ideas. To beat Trump, the Democratic nominee must somehow bring the family intact through the battle of Philadelphia or, if that proves impossible, put it back together again before the real war is joined on Labor Day and all bets are off.