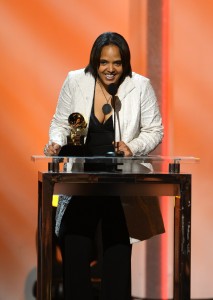 According to Carrington, she was born in Medford, Massachusetts, into a musical family. Her mother played piano as a hobby and her father was a saxophonist and president of the Boston Jazz Society. At the age of seven, Carrington was given a set of drums that had belonged to her grandfather, Matt Carrington, who had played with Fats Waller and Chu Berry. After studying privately for three years, she played her first major performance at the Wichita Jazz Festival with Clark Terry. At the age of 11 she received a full scholarship to Berklee College of Music. When she was 12 years old she was profiled on the PBS kids’ biography program Rebop.

In 1983, encouraged by her mentor, National Endowment for the Arts Jazz Master drummer and composer, Jack DeJohnette, Carrington moved to New York, where she worked with Stan Getz, James Moody, Lester Bowie, Pharaoh Sanders, Cassandra Wilson, David Sanborn, and others.

In the late 1980s Carrington relocated to Los Angeles, where she gained recognition on late-night TV as the house drummer for The Arsenio Hall Show, then again in the late 1990s as the drummer on the late night TV show VIBE, hosted by Sinbad. In 1996 she collaborated with Peabo Bryson on Always Reach For Your Dreams, a song commissioned for the 1996 Olympic Games. In 2007 she was appointed professor at her alma mater, Berklee College of Music, where she received an honorary doctorate in 2003. Carrington also serves as Artistic Director of the Berklee Beantown Jazz Festival.

Carrington’s The Mosaic Project, was her fifth studio album as a leader, won the award in the category Best Jazz Vocal Album at the 54th GRAMMY® Awards in 2012.

San Diego County News was able to catch up with some of the artists who have worked with Carrington over the years to share their reactions to her winning the 2013 Best Jazz Instrumental Album GRAMMY®:

Quincy Jones: “Congratulations Terri on winning this much deserved honor – you are the BEST in everything you do!”

Wayne Shorter: “What an excellent job you and the musicians did on Provocative In Blue. I have always admired you and greatly respect the quality of work you have produced over the years…looking forward to more projects and collaborations soon.”

Jack DeJohnette: “When I first heard you play drums I knew instantly that you were destined to be a great artist. Your talents are enormous and winning the GRAMMY for Best Jazz Instrumental Album is a testament of how great you are. I love you and keep those sticks swinging!”

Esperanza Spalding: “My soul sister and friend, congratulations on this wonderful recognition. As you already know Geri[Allen] and I consider you family and we are just tickled that you won the GRAMMY for Best Jazz Instrumental Album.”

Arsenio Hall: “Terri, congratulations on winning your second GRAMMY! It’s a pleasure and a privilege to have you as a friend…keep the big boys on their toes and I am looking to see more great things from you in the future.”

San Diego County News’ reviews of Carrington’s GRAMMY-winning masterpieces can be read by clicking on the selected articles: PROVOCATIVE IN BLUE and MOSAIC PROJECT.