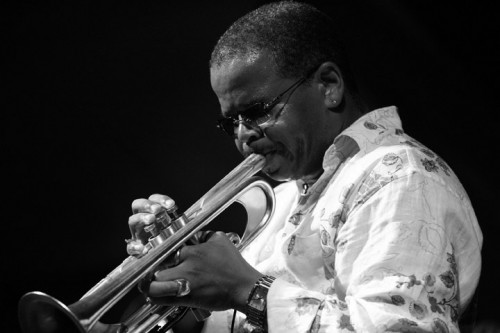 WASHINGTON – Terence Blanchard , the five-time GRAMMY® AWARD winning trumpeter and composer, dazzled audiences with his virtuosity, his melodicism and his infectious energy during his August 8-11, 2013 sold-out performances at Washington, DC’s preeminent jazz venue, Blues Alley. The Blue Note Records label artist performed several selections from his latest Magnetic CD, composed of ten tracks of electrifying, swinging and complex rhythms offering numerous interactions with his quintet, which was on full display at Blues Alley on August 11.

New Orleans native Blanchard, 51, reflected on the historic aspects of the roots of jazz was predominant on his mind as he created the compositions for the album: “Magnetic is a special album because it consists of original compositions, and is truly an homage to those who have inspired and influenced me, both personally and musically over my 35+ years in the music business. And the seeds have been planted, directly or indirectly, by the people who have been instrumental in my development.”

Blanchard indeed has borrowed from and upheld many aspects of the jazz tradition. His compositions in this CD also form an important part of his musical identity, creating a spiritual link with great horns men like Louis Armstrong, Freddie Hubbard, Miles Davis, Dizzy Gillespie, pianist Ellis Marsalis, and the incomparable composer and trumpeter, Alvin Alcorn, all influenced and inspired Blanchard to musical excellence.

Terence Blanchard’s Blues Alley performance brilliantly displayed his mastery of the altissimo range and his overall technical skill has set new standards for future generations, and while technique in itself is not everything, like all the jazz players previously mentioned, Blanchard clearly shows balance within his original forms of expression in Magnetic.

Blanchard kicked off his Sunday night set with a tune from his newly released CD called Jacob’s Ladder. The tune began with sax man Brice Winston opening with a slow and steady meditative theme statement, then Cuban pianist Fabian Almazan plays a technique which contains all the earmarks of the classical, stride, and avant-garde — making him one of the most gifted pianists of his young generation.

Blanchard’s solos is the star of the Jacob’s Ladder piece, which contains barrelhouse energies derived almost solely from the pre-modernist rips, snorts, and glissandi of the legendary Freddie Hubbard. Blanchard’s effortless phrasing, combined with the understated playing of drummer Kendrick Scott, captures the music’s easygoing and occasionally moderate poly-rhythms. Blanchard and Winston’s playing has an irresistibly offhand confidence as they alternates long and short phrases, bounces along on the one-note idea of the bridge, and rises to a couple of high-note climaxes that were something of a Terence Blanchard specialty – increasing not only his range but also the power of his timbre. 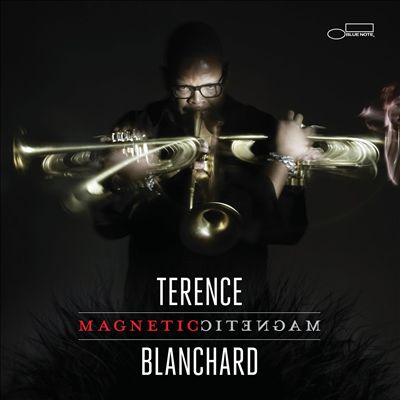 Another selection from Magnetic, which was performed live at Blues Alley, was called Hallucination. Again we have excellent piano work from Almazan with Blanchard giving us fluid attacks which is especially noteworthy as he navigates the turnarounds, the measures that end one chorus and leads to another – and man did Scott navigate his way so smoothly on those drums; his explorations of polyrhythmic devices, superimposition of meters – and the further subdivisions of those meters – was welcome input to the piece. Scott was a true powerhouse drummer on this selection and gave a memorable and dynamic performance. Throughout the entire show, Scott showed us why he is a dynamic drummer who encompasses many diverse elements that included complete four-limb independence, the variation of tone colors, and a unique sense of phrasing. Blanchard’s manner of moving from one chorus to another emphasizes the cumulative drama and overall coherence of the performance.

The Don’t Run selection and performance is interesting simply because it has Blanchard playing ridiculously innovated solos which are uneven – much strolling to make a point, though the point is usually worth waiting for. This is definitely a straight-up post-bebop modern composition which has Blanchard playing variation of solos, but he comes up with a conceit that makes you shake your head in wonder. Bass man Joshua Crumbly is the stoic servant who quietly controls the action because he is the only one who knows where everything is, including the slippery beat. Although Scott is never especially loud, there are times when his drums totally take over. He keeps time one moment, and then instigates menacing levels of aggression the next. Don’t Run is simply a splendid work of art!

Terence Blanchard has never been one to hoar all the glory to himself. He is a gracious and sharing musician. This is evident on Magnetic and the live performance in which you have exceptionally gifted artists given the unique forum to strut their stuff.  This is where the beauty of Magnetic lies. This is what so delighted fans and peers about Blanchard’s voluminous body of work; not just his musicianship but the brilliance of his musicianship. But he needs to play with dazzling virtuosity that tells you he knows his instrument. He only needs to play only a simple set of notes to melt and inspire every heart in the room – if he has the talent to choose the right phrase.Terence Blanchard succeeded in doing just that and much more.