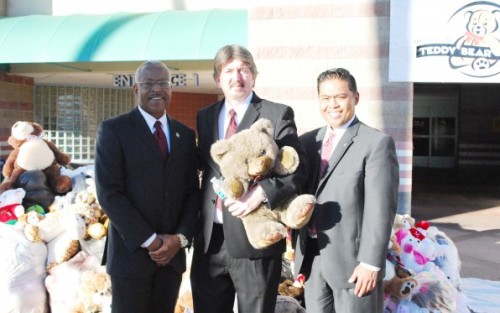 SAN DIEGO–More than 60,000 bears and stuffed animals collected as part of the San Diego Regional Law Enforcement Teddy Bear Drive will find their way into loving little arms at Rady Children’s Hospital-San Diego, many today, and the rest throughout the year.

Josh and Michelle Rathweg of San Marcos came to Rady Children’s Tuesday to show their appreciation to the hospital, where the staff saved their daughter’s life, and to the law enforcement officers who help collect stuffed animals for the children. Bryn, their 4-year-old daughter, was diagnosed with a rare cancerous brain tumor at 10 months old.  Although she has fully recovered now and is cancer-free, Rathweg said a year of treatment and being stuck in a hospital room was not terribly inspirational for a child. But a teddy bear from the Teddy Bear Drive found its way into her room.

“You can never tell what a kid is going to latch onto and find special,” said Josh Rathweg.”So a teddy bear allowed her to really have an imagination, to play to have some fun in a place where it really is hard sometimes when you’re being treated.”

“She saw everyone caring for her all the time because she was sick and what we noticed as parents is she would care for the teddy bear. She would wrap it up, she would pretend like she was, you know, giving it a Band-Aid. She would hold it and rock it. It was all the things that we were doing for Bryn, we started seeing her expressing it with the actual bear,” said Josh Rathweg.

The 25th annual drive was hosted this year by the San Diego County Probation Department and the Coronado Police Department.

Probation Chief Mack Jenkins said he was moved by the Rathweg’s story because it epitomizes why officers collect the bears.

“I’m very pleased that my department is involved,” Jenkins said. “Seeing the officers’ enthusiasm to do this and seeing the little kids’ faces here are two of my favorite things about this Teddy Bear Drive.  It’s really just reaffirming the positive parts of human nature. It makes you want to pay it forward.”

Coronado Police Chief Jon Froomin told onlookers in a brief ceremony that the drive started in 1990 when Coronado Police Officer Brian Hardy, who is retiring this month, came upon an empty donation bin at the hospital. He bought 12 bears from his own money and donated them in the name of the Coronado Police Department and the event just grew over the years to include every local, state and federal law enforcement agency in the County.

Hardy was presented with a plaque Tuesday from Rady Children’s Hospital showing its appreciation for all his work over the years.

Law enforcement officers collect new stuffed animals throughout the year, many donated by the officers and deputies themselves, and reach out to the community around the holidays for even more donations. The stuffed animals are stored at the hospital and given to each child admitted year round.

Every year, law enforcement makes one big drop-off in early December along with some special guests like San Diego Chargers players. Together, they visit children in their rooms and pass out teddy bears. But some children just can’t resist the temptation to go down to the big crowd early and meet the officers and pick out their new special friend from among giant mounds of stuffed animals.

Patient Evette Perry, 10, of San Diego, who suffers from Crohn’s disease, had been watching the crowds grow and grow from her hospital room window, which faces down onto the plaza where the ceremony took place. Finally, her mother relented and they walked down, pulling her IV rolling pole with her. Ultimately, she selected a large tan bear to cuddle with in her room.

Jordan Millar of Mira Mesa came upon the scene with her 4-year-old son Jules Sheoran, who was wearing a face mask, and who was there for a chemotherapy appointment.

“He was very excited to see all the policemen,” Millar said. He was encouraged to pick out a stuffed animal and he chose an Olaf the Snowman, a character from the Disney movie Frozen. “This is amazing to see the generosity of people,” she said.”I had no idea this was going on.”

Deputy Probation Chief Cesar Escuro brought to the event a stuffed gray elephant that his 7-year-old son received three months earlier when he was admitted to the hospital with gastrointestinal problems. His son gave him strict instructions to bring it back home, so the stuffed animal could be returned to the prominent spot on his shelf where it usually sits.

Escuro said the day his son was admitted, his wife stayed home with their other son, so when doctors pulled him outside the room to talk to him, his son was understandably nervous about being alone in the room. Then a nurse brought him the toy elephant and that was a real comfort to him.

“He actually held onto it, waiting for me,” Escuro said.