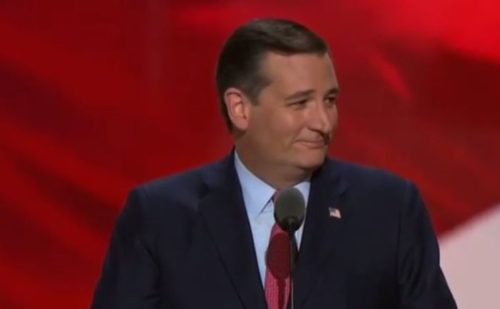 CLEVELAND –  Former Republican presidential candidate, Senator Ted Cruz (R-TX), spoke to a Texas delegation brunch in Cleveland Thursday morning where he was repeatedly hard-pressed and declined to endorse Republican nominee Donald Trump. On Wednesday night he was booed off the stage after telling voters to “vote your conscience” but not endorsing the party’s nominee.

“I am doing what millions of Americans are doing I am watching, I am listening,” Cruz said. “The election isn’t today,” he went on to add.

Cruz said he had been very clear about his intention to the Trump campaign, even telling Trump he would not endorse him in a conversation before the convention and letting the campaign read his speech hours before.

“I assume there’s a reason the Trump campaign wanted me to speak,” he said.

Some delegates angrily confronted Cruz and angrily shouted “your word is your bond that’s what you said” for not keeping to the Republican pledge.

Cruz responded that when he originally made the pledge he had every intention of keeping it until the race became personal.

“I am not in the habit of supporting people who attack my wife and who attack my father,” he said. During the primary campaign, Trump sent out Twitter messages threatening to “spill the beans” about Cruz’s wife, Heidi, and Trump implied that Cruz’s father, had been photographed with Lee Harvey Oswald, the assassin who killed President John F. Kennedy.

San Diego County News was able to chat with a number of prominent news media reps from MSNBC, CNN, ABC, CBS, and NBC networks, and all were unanimous in their assessment that “the 2016 Republican National Convention is the worst they have seen in decades.”

Chuck Todd, host of NBC’s “Meet The Press” told San Diego County News and spoke publicly on-air, “I have never seen a more disorganized and chaotic convention as the one I am covering now.”

Donald Trump has stated on the record that he “only hires the best” to work for him. After the series of events this week involving plagiarism charges against his wife Melania, and the Ted Cruz bomb shell last night, the American people may be witnessing first-hand and having front row seats into what a possible Trump administration would look like. “Strange,” “chaotic,” and “unhinged” are some of the words we have heard from some of the delegates.

“How is it that the Trump team did not see this coming,” says George Devonshire, a Trump delegate from Virginia. “Cruz should have never been allowed to speak unless the Trump people had assurances that he was going to give Trump a full endorsement,” he angrily concluded.

Cruz was not buying none of it. One delegate shouted to Cruz at the breakfast, “this is politics!”

Cruz responded: “This is not a game, this is not politics and I am not buying into it.”

Mostly he needs to find a way to combine the most effective theme of his candidacy — that of an outsider who connects with disgruntled and disaffected voters and will shake up Washington — with something that reassures people of his temperament, stability and reliability. He can still redeem the week, but the opening days haven’t done much to help him.

The majority of Republican Anti-Trump people we talked to at the convention like conservative talking heads heavy weights Bill Kristol and Armstrong Williams, do not believe that Trump is capable or up to the task of doing all the above.

“The best you can always count on it’s going to be all about Donald,” stated Armstrong Williams.