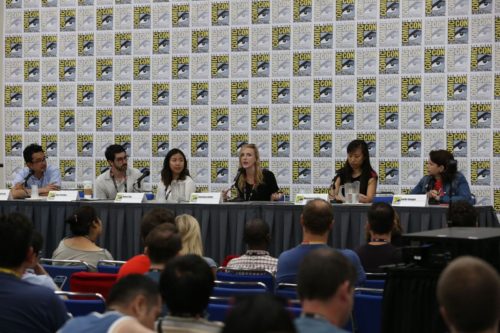 SAN DIEGO–Friday morning, some of the leading filmmakers, executives, and professionals in virtual and augmented reality storytelling discussed emerging opportunities for women and other minority voices in this innovative medium.

Moderating the panel was Jonathan Nafarrete (editor-in-chief, VRScout.com). The well-renowned journalist led the panelists in a discussion about the future of VR. Speaking of the panelists, he said, “It’s such a diverse group that have such different perspectives of the industry as we move forward into the future.” Nafarrete continues, “It was a really a honor to be able to moderate such an amazing group.”

The panelists all reflected on their love of the medium and the moment they knew they wanted to be part of this emerging field. Evette Vargas noted, “I grew up drawing and painting–everything was all about this virtual image.” For her, VR was a natural next step, saying, “VR wasn’t a decision–it chose me.” Elia Petridis, too, naturally entered the virtual reality industry from his experience as a talented filmmaker. “I was tasked as a creative to come up with a very specific piece of VR, Eye for an Eye, and I caught the bug from there,” Petridis said, “I was approached as a filmmaker first and foremost.”  Maureen Fan, starting in animation, also described her introduction to VR as natural. “Animation and VR were made for each other. They make you think it’s so real that you can reach out and touch it,” Fan said.

Nafarrete also questioned the panelists on challenges and discrimination that they have faced in their careers. Fan reflected on many of her own experiences finding funding and support as a female person of color, saying, “Statistically, it is harder to not be a tall white attractive female.” Christina Heller agreed, adding that VR is an industry with the potential for change and growth. Heller said, “I am noticing a shift opening up around women leadership, where there are so many badass women in VR. I feel like change is afoot.”

Evette Vargas echoed many of Fan and Heller’s concerns, recognizing, “I’m usually the only woman or person of color in a room.” Based on these experiences, she advises other women or people of color, “if you want to be heard in those rooms, you have to stand out.” Helen Situ had similar experiences, revealing, “People always assume I’m someone’s assistant.” Situ urged the audience to not lose hope, adding, “People will always assume things about you. Speak up and prove them wrong.”

Virtual reality, the panelists agreed, has the potential to create real change for minorities. Elia Petridis spoke of the new opportunities that virtual reality provides storytellers, placing viewers in a first-person perspective. In this storytelling world, Petridis argues, “Audiences will have to embrace the gaze that the project is shot from.” Pointing out the incredible women around him leading the VR field on the panel, Petridis continued, “For advice in this industry, I’m always looking towards the ladies.”

The panel concluded with the panelists’ thoughts on the future of VR and their tips for those interested in pursuing a career in virtual reality. Helen Situ emphasized the importance of meet-ups for emerging filmmakers, encouraging the audience to put themselves out there as much as possible to meet the right people.  Maureen Fan commented on the excitement of a new emerging industry, saying that as new filmmakers, one must be constantly innovating and exploring their craft. “The other piece of advice here is to forget everything we’re saying,” Fan encouraged. “Break all the rules.”

As a final word, Christina Heller emphasized the power of virtual reality to change the way audiences think about story. Eventually, Heller says, “we can move beyond gender altogether in that VR space. You won’t know if you’re engaging with a man or a woman or a unicorn or an octopus. And then people can bring this into their own life.”

The panel was presented by Filmatics VR/360 Creative Services and founder/CEO Elia Petridis. He recently completed a 12 minute horror VR piece in conjunction with WeVR, “Eye for an Eye VR,” which is set to debut this fall. Following his international success on the film festival circuit, Elia Petridis now serves as a pioneer creative in cinematic virtual reality and prides himself on creating stories worth telling in these emerging mediums.

The crowd left the panel excited for the possibilities of virtual and augmented reality in the future.