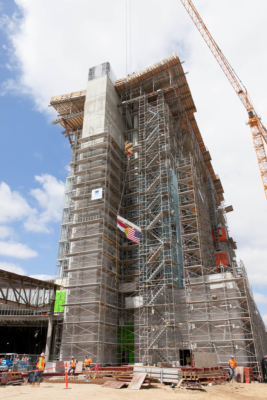 SAN DIEGO–(PRNewswire)–Sycuan Casino announced that its expansion project has reached another major milestone. The organization hosted a Topping Off Celebration on Tuesday to place the final beam on its new hotel tower.

During the celebration, Chairman, Cody Martinez and General Manager, John Dinius acknowledged the hard work of the team and gave the latest project milestones before raising the final beam into place. The Sycuan Band of the Kumeyaay Nation Tribal Council, Sycuan Casino Executive Team and Swinerton Project Management Team were all in attendance for the event.

“Without the support of our people, we would have never been able to get this project off the ground,” said Cody Martinez, chairman of the Sycuan Tribal Council. “I want to thank the members of our Tribal Council, the Casino Executive team, Swinerton and everyone that is here bringing together the vision that is going to take Sycuan to the next level.”

“Seeing this project go from two-dimensional paper drawings to what we have now, is truly inspiring,” said John Dinius, general manager at Sycuan Casino. “It’s been a monumental task, but with the collaboration of every aspect of our organization, it’s a very rewarding process.”

Additionally, the expansion project has created over 700 new casino and resort jobs. The organization is currently hiring for departmental leadership positions and will host a series of job fairs mid to late 2018.

The new hotel and resort is on schedule to open in March 2019.