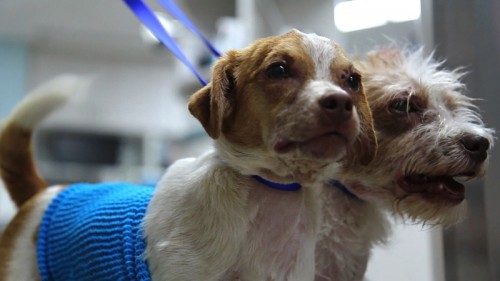 Woody and Buzz recovers at a veterinary hospital.

ESCONDIDO–San Diego County Animal Services investigators are asking for the public’s help in locating any witnesses or information regarding five puppies that were tied to a tree directly under an active bee hive in Fallbrook. Three of the dogs were found dead and the other two had suffered multiple bee stings.

Firefighters with CAL FIRE discovered the gruesome scene when they responded to a suspicious fire in a field at the 41200 block of De Luz Road Thursday, May 31. It was approximately noon when the puppies were found under a tree about twenty-five feet from the fire.

The three dead puppies were described as a five-month-old Rottweiler that died from unknown causes and two five-month-old Jack Russell Terriers that died from strangulation, which most likely occurred as they tried to desperately escape the swarm of bees. The two surviving puppies, both five months old, are a male Jack Russell terrier mix and a male Chihuahua mix. It is unknown if the person who tied the puppies under the tree knew about the bee hive.

The two puppies that survived were in critical condition for several days after being transported to a local emergency veterinary hospital. The puppies have been receiving around-the-clock care. Both dogs were stung dozens of times and due to its critical medical condition, one of the puppies underwent a blood transfusion earlier this week.

The County Department of Animal Services’ (DAS) Spirit Fund is covering the costs of their care.

DAS investigators are trying to determine who tied the puppies to a tree and then apparently abandoned them. CAL FIRE is investigating the cause of the fire.

DAS staff expects the puppies to be moved to their shelter in Carlsbad soon, but because of their injuries, they are not available for adoption at this time.

Anyone interested in helping to pay for the continued care of these puppies can donate to the DAS Spirit Fund at www.sddac.com/donations.asp.

If the public has any information on the puppies, they can call the Department of Animal Services at (619)767-2624.