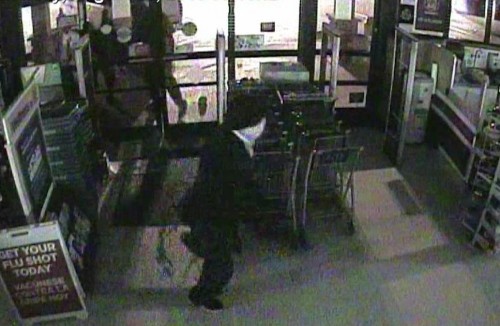 SAN DIEGO–Crime Stoppers and investigators from Poway Sheriff’s Station are asking for assistance from the public to help identify and locate at least five suspects wanted in connection with an ATM theft.

On Monday at 3:15 a.m., unknown suspects broke the glass front door of the Rite Aid, located at 12666 Poway Road in Poway. At least five suspects entered the store. They used one end of a steel cable to secure a stand-alone ATM and tied the other end to a white pickup truck that was parked outside. Once the ATM was secured, the suspects pulled it off of its foundation and dragged it out of the store. The suspects then loaded the ATM onto the bed of the truck and fled the scene.

On August 31 at approximately 8:30 p.m., the ATM was recovered by two San Diego police officers in the 5300 block of Bonita Drive in Southeast San Diego. The ATM was broken apart and there was no money inside.

There are no suspects’ descriptions at this time.

No license plate was seen.