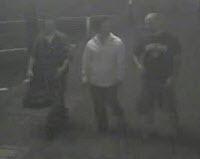 San Diego County Crime Stoppers and investigators from the San Diego Police Department’s Central Division are asking for assistance from the public in identifying a suspect wanted for felony battery.

Investigators said that on Sunday, May 30 at approximately 1:45 a.m., a 38-year-old male was walking with friends in the 500 block of J Street in Downtown San Diego. Without any warning, an unknown male suspect walked up to the victim and punched him in the face. The victim fell back onto his head causing serious injuries. The suspect then turned and punched a companion of the victim. The first victim was hospitalized for four days and is still recovering from the assault. The suspect fled the scene on foot.

Suspect is described as white or Hispanic male, late 20’s to mid 30’s, bald, about 5’11” tall and a medium build. He was wearing a black t-shirt, shorts, and possibly a small gold necklace.

Investigators are asking anyone with information on the identity and or location of the person responsible for this crime to call SDPD Central Division at (619) 744-9500 or the Crime Stoppers anonymous tip line at (888) 580-8477. Crime Stoppers is offering up to a $1,000 reward to anyone with information that leads to an arrest in this case. Anonymous email and text messages can be sent in via www.sdcrimestoppers.com.