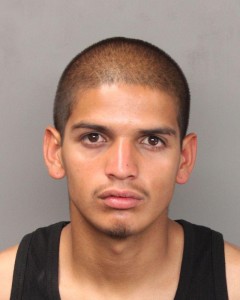 NATIONAL CITY–Crime Stoppers and investigators from the National City Police Department are asking for assistance from the public to help locate Daniel Aguirre who is wanted for attempted kidnapping.

On July 1, at 5:15 p.m., a female victim was walking in the 2200 block of Highland Avenue in National City. The female’s ex-boyfriend identified as Daniel Aguirre, drove up next to her, stopped and got out of his vehicle. Aguirre grabbed the victim and began to drag her towards his car. Aguirre punched the victim in the face and tried pushing her into his vehicle. Numerous citizens stopped to help the victim get away from Aguirre. He fled the scene in his vehicle. Aguirre’s vehicle has been recovered, but he remains at large.

Aguirre is described as a Hispanic male, 19-years-old, five feet, four inches tall, 135 pounds, black hair and brown eyes. Aguirre has a tattoo of “M Street” on his right arm. He is known to frequent the Mid-City area of San Diego.

Anyone with information on the location of Aguirre is asked to call the National City Police Department at (619) 336-4411 or the Crime Stoppers anonymous tip line at (888) 580-8477. Crime Stoppers is offering up to a $1,000 reward to anyone with information that leads to an arrest in this case. Anonymous email and text messages can be sent via www.sdcrimestoppers.org.