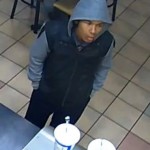 EL CAJON–The El Cajon Police are looking for the public’s assistance in identifying a suspect involved in an armed robbery that occurred on December 30 and an attempted robbery on January 1.

On Monday, at approximately 11 p.m. the suspect robbed a Subway restaurant, located at 220 W. Main Street in El Cajon, after displaying a handgun.

The suspect is described as a possible Black or Asian male adult in his early 20’s, 5 to 8 inches tall, and approximately 150 pounds, wearing a gray and black hooded sweatshirt and dark pants.

On January 1 at approximately 7:30 p.m. , a person matching the description of the suspect described above attempted to rob the Rally’s Burger at 1261 E. Main St. in El Cajon after brandishing a handgun but was unsuccessful.

The suspect is believed to be armed and dangerous at this time. Anyone with information regarding the identity of the suspect is asked to contact the El Cajon Police Department at (619) 579-3311.

People with information on the identity of a suspect in this case may also qualify for a $1000.00 reward by calling Crime Stoppers anonymous tip line at (888) 580-TIPS.