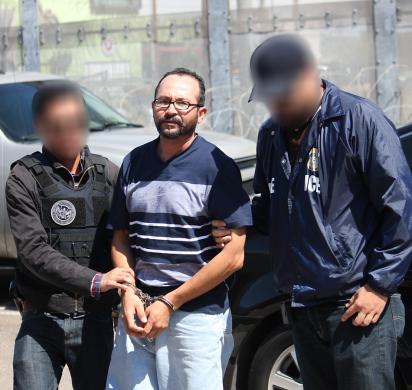 LOS ANGELES–A Mexican chef who allegedly used one of his sushi knives to fatally stab a female companion in the backseat of a Mexico City taxi earlier this year was handed over to Mexican law enforcement officials by U.S. Immigration and Customs Enforcement (ICE) Tuesday less than two weeks after his capture in Los Angeles.

According to investigators, the accused was riding in a taxi Feb. 1 with the victim, Claudia Contreras Mendieta, 36, when the two began arguing. The cab driver saw the woman’s bloodied face in the rearview mirror and pulled over to render aid. After getting out of the vehicle, the driver opened the cab’s rear door and saw the woman had been stabbed and her face slashed. The driver told authorities the suspect then stabbed him, before fleeing. Mexican law enforcement officials believe the suspect, who was employed as a sushi chef, used one of his kitchen knives during the assault. The woman died at the scene despite efforts to revive her.

Early last month, investigators with the PGJDF contacted the ICE Attaché office in Mexico City after developing information that Reyes-Rodriguez might be hiding out in the Los Angeles area. Subsequently, ICE’s attaché and ERO officers in Los Angeles worked closely with the FBI’s Fugitive Task Force, which includes the Los Angeles Police Department, to locate the suspect. On July 1, authorities surrounded Reyes-Rodriguez outside an apartment complex in Baldwin Park and took him into custody without incident.

Department of Homeland Security databases indicate Reyes-Rodriguez has been previously deported twice, most recently in 2003. ICE reinstated Reyes-Rodriguez’s removal order, paving the way for his repatriation Tuesday. The suspect’s only prior criminal conviction in the U.S. was 13 years ago for DUI in Los Angeles.

“As this case makes clear, violent fugitives who believe they can evade justice by fleeing to the U.S. will find no refuge here,” said David Jennings, field office director for ERO Los Angeles. “Owing to some outstanding investigative work by ICE and its partner law enforcement agencies, both locally and in Mexico, this suspect will now be held accountable if the courts find he did indeed commit this brutal crime.”