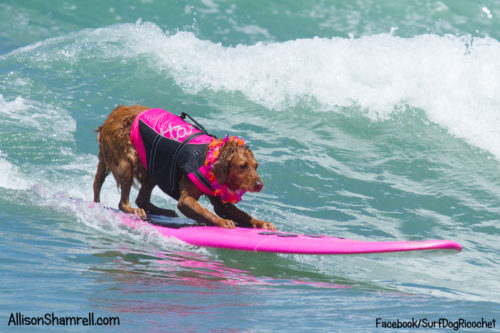 The funds have helped more than 250 different causes, as well as Ricochet’s programs and initiatives.

Reaching this major milestone demonstrates how much Ricochet’s worldwide community supports her efforts.

Most of Ricochet’s fundraising has been done through social media, such as her popular Facebook Page with more than 259K supportive fans, Instagram with more than 104K followers and her inspirational video “From Service dog to SURFice dog” with more than 6.4 million views.

Ricochet has been raising awareness and funds for human/animal causes since 2009 when she made an independent decision to jump on a surfboard with Patrick Ivison, a quadriplegic surfer. As a result, she became the only SURFice dog who creates unique programs, initiatives and surf therapy experiences that empower kids with special needs, people with disabilities, wounded warriors and veterans with PTSD.

Prior to Ricochet, there were no dogs committed to adaptive surfing. As such, she became the Canine Ambassador for Surfers with Disabilities, and revolutionized the healing power of the ocean, and the healing power of dogs. As the years passed, there have been a number of surfing dogs inspired by Ricochet’s work who are now sharing the stoke of surf therapy, such as Sugar the Surfing dog in Huntington Beach, and Leia from Walking on Waves in South Africa. Ricochet acted as a mentor to their program, and made a $500 donation to one of their surf sessions this past summer.

Having more dogs in the line-up comes at a time when Ricochet’s grassroots initiatives have organically evolved to the next level. One of those initiatives is her Waves of Empowerment program that empowers individuals to help themselves by helping others, while maximizing their well-being. These are folks that Ricochet has previously surfed, or worked with, who are now volunteering to help the next wave of disabled surfers get on board with her.