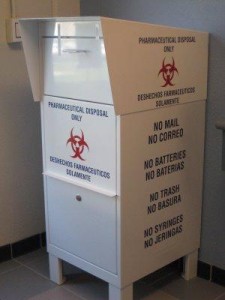 The ordinance, brought forward by Chairwoman Pam Slater-Price and Sheriff Bill Gore, aims to reduce the abuse of prescription drugs obtained from the home by offering safe places to surrender the medications – “no questions asked.”

“Thank you for your continued support in reducing the abuse of prescription drugs,” said Dana Stevens of Communities Against Substance Abuse, who collected more than 250 signatures in support of the county ordinance.

The need for the program became evident to Slater-Price and Gore after the Oxy Task Force of San Diego County hosted two highly-successful countywide prescription drug Take Back Days. Sheriff’s officials collected nearly 2,900 pounds of prescription drugs from the public.

“Those drugs could have easily fallen into the wrong hands and led to abuse, addiction or worse – death,” Chairwoman Slater-Price said. “One thing became incredibly clear: a permanent, safe solution to dispose of prescription drugs must be found for San Diego County.”

Sheriff’s officials will regularly collect the medications for safe destruction. The drop boxes are being put out for a public bid. Officials hope to have them installed by fall.

The cost of the boxes will be paid for by the Sheriff’s budget and Slater-Price’s Neighborhood Reinvestment Program grants.