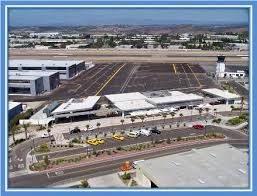 CARLSBAD–On Monday, County Supervisor Bill Horn, and Carlsbad Mayor Matt Hall, released the results of a study to determine if it is possible to extend the runway at McClellan-Palomar Airport. The study found not only is it possible from an engineering perspective, but it would also improve runway safety, reduce airport noise, create jobs and stimulate the local economy.

The 15-month study, conducted by Kimley-Horn & Associates, recommends a 900-foot extension of the runway, which could receive partial funding from FAA grants. A 900-foot extension also offers the best benefit-cost ratio of the alternatives studied. In addition, the study revealed the FAA will likely fund 90% of a $25 million dollar safety improvement project for the west end of the runway, providing an extra margin of protection for arriving and departing aircraft.

A runway extension would decrease aircraft noise levels in surrounding neighborhoods because planes will take off farther to the east, reaching higher altitude before flying over nearby homes. The economic benefit from an extended runway: increased jobs, increased revenues and an increase in visitor spending, is expected to infuse over $163 million into the North County region over the next 20 years.

The total cost of the runway lengthening project is $95 million, which includes the $25 million dollar safety improvements. The local share of the overall cost is estimated to be $35 million, with the balance likely covered by FAA grants. The project must be incorporated into the Airport Master Plan in order to proceed, and is years down the road. Until then, the search for funding will be a priority.

The complete runway extension feasibility study will be presented to the Board of Supervisors on Wednesday, September 25th.