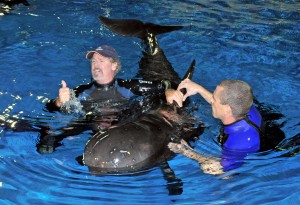 SAN DIEGO–A young male pilot whale is getting acclimated at SeaWorld, after being transported to the marine-life park for long-term care. Named after the famous airline pilot Captain “Sully” Sullenberger, Sully the pilot whale arrived to SeaWorld yesterday after being transported from Curacao, a Caribbean island near Aruba, in a special transport unit aboard a chartered FedEx A300 Airbus cargo plane. SeaWorld animal care specialists and veterinarians are keeping a close watch on Sully, who weighs nearly 1,000 pounds and measures approximately 11 feet long. He is being cared for in a behind-the-scenes animal care pool at SeaWorld and will be under quarantine for 30 days.

“We couldn’t be more pleased with how well Sully is adjusting to his new home,” said Dr. Tom Reidarson, senior veterinarian at SeaWorld San Diego. “He is eating and swimming normally, and initial blood tests have shown no signs of any illness or problems.”

Sully’s story is one of courage, tenacity and the will to overcome extreme odds. The animal was found beached on Jan Tiel Bay in Curacao, a Caribbean island near Aruba, in July of last year. Rescuers from the Southern Caribbean Cetacean Network (SCCN) were called in to investigate. Their initial assessment was that the pilot whale was suffering from severe starvation and dehydration and was not likely to survive. In the days to come, they tube fed Sully with a special formula of nutrients until he was able to eat herring and other fish that are part of a pilot whale’s natural diet. Sully had overcome his first major hurdle.

Rescuers then treated a serious infection on the pilot whale’s tail with antibiotics. Sully had dodged another bullet.

Once Sully was nourished and energetic, rescuers made several attempts to re-introduce the pilot whale back out into the ocean and to wild populations of pilot whales. Each time rescuers took Sully out to sea, he followed the boat back, sometimes at speeds near 25 mph.

Sully continued to appear healthy and active, but each attempt to release him was unsuccessful. Because the animal is young (he is estimated to be between one and three years old) and showed no signs of being willing or able to re-integrated into the wild, experts determined that the best place for Sully would be in a zoological facility with other pilot whales. SeaWorld San Diego, one of the few places in the world to house pilot whales and with a team of experts who has cared for the species for more than two decades, was deemed the best choice. Permits were acquired and the transport was planned.

SeaWorld uses the highest level of care when moving animals. During transports, animals are accompanied by animal care specialists and a veterinarian. The transport from Curacao to San Diego took approximately 7½ hours. By his side during the entire trip were SeaWorld Curator of Mammals Keith Yip, SeaWorld Assistant Curator Eric Otjen, SeaWorld Veterinarian Dr. Jim McBain, and George Kieffer, the president of the Southern Caribbean Cetacean Network and Sully’s main caretaker in Curacao. The air temperature in the aircraft was maintained at 75 degrees during the flight. Once the aircraft arrived in San Diego, the transport unit was off-loaded and placed on a flatbed tractor-trailer and was driven to the park. A crane was then used to lift the animal out of the transport unit and into his pool. As Sully reached the water, animal care specialists gently assisted him until he was able to swim on his own.

“Within 30 minutes of his arrival, he ate a meal of herring at SeaWorld,” said Reidarson. “That was more than I could have hoped for.” Another challenge conquered.

Animal care specialists stayed with Sully through the night and were very pleased to see how well he adjusted. “Those first few hours of transition are critical,” added Reidarson, “and we are extremely happy with his progress.” Reidarson says he is continuing to eat a normal diet, swimming and exploring his pool, and playing with a ball that had become very familiar to him in Curacao.

SeaWorld animal care specialists and veterinarians will continue to keep a close watch on Sully and ensure that he continues to eat properly, exercise and acclimate to his new home. They will monitor his health through regular exams and blood tests. Eventually Sully will be gradually introduced to other pilot whales at SeaWorld so that he can become part of their social group.

SeaWorld San Diego is home to two other pilot whales: Bubbles, a 3,000-pound, 47-year-old female; and Shadow, a 2,000-pound, 30-year-old female. They have performed, alongside bottlenose dolphins, for more than two decades at SeaWorld.

Pilot whales are divided into two sub-species: short-finned and long-finned. Sully, along with Bubbles and Shadow, are short-finned pilot whales. The species is found in temperate and tropical oceans worldwide. While their population is stable, these whales face some threats in their environment, including drive fisheries who target them for their meat, blubber and oil; and trawlers and longline fisheries, who incidentally take pilot whales into their nets.

Pilot whales on average weigh between 1,500 and 4,000 pounds. Males can grow as large at 6,000 and females can weigh as much as 3,000 pounds. Their diet consists primarily of squid and fish and they can consume approximately five percent of their body weight daily. Like bottlenose dolphins, pilot whales use echolocation for foraging and navigation.

SeaWorld Parks & Entertainment operates 10 parks across the U.S. including some of the best recreational parks in Tampa and SeaWorld parks in San Diego, San Antonio and Orlando, Fla.; Busch Gardens parks in Tampa, Fla. and Williamsburg, Va.; Discovery Cove and Aquatica in Orlando; Sesame Place near Philadelphia, Pa.; and water parks Adventure Island in Tampa and Water Country USA in Williamsburg.