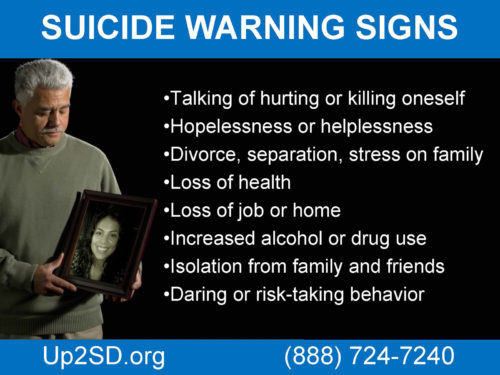 SAN DIEGO–After three years of holding steady, the number and rate of people who killed themselves in San Diego County went up in 2017.

According to the San Diego County Suicide Prevention Council’s 2018 Report to the Community released today, there were 458 deaths by suicide last year, 27 more than in 2016.

“Suicide continues to be a serious concern in our region,” said Dr. Michael Krelstein, clinical director of Behavioral Health Services for the County Health and Human Services Agency. “We must do all we can to prevent people from taking their lives and it starts by knowing the warning signs of suicide.”

The annual report provides a comprehensive look at suicide in the region and brings together data from multiple sources for the years 2013 through 2017.

Among the suicide report’s findings:

The great majority of people who die by suicide show warning signs. Knowing how to spot them and what you can do may help save a life.

“Helping people get help for a mental disorder is part of the County’s Live Well San Diego vision of healthy, safe and thriving residents,” Krelstein said. “When a friend or a loved one comes to you for help, take it seriously. Ask if he or she is having thoughts of suicide or ending it all. That simple conversation can help save a life.”

To help curb suicide in San Diego, the County has several ongoing prevention efforts, including the It’s Up to Us campaign, the Mental Health First Aid and Question, Persuade and Refer trainings, and the Access and Crisis Line, a confidential counseling and referral hotline for people who feel overwhelmed or are experiencing a mental health crisis.

“The good news is that fewer people are ending up in the emergency room because of a self-inflicted wound and more San Diegans are reaching out for help and calling the hotline,” Krelstein said.

Suicide is preventable. That is why it is important to learn the warning signs, risk factors and behavioral cues of people considering ending their lives.