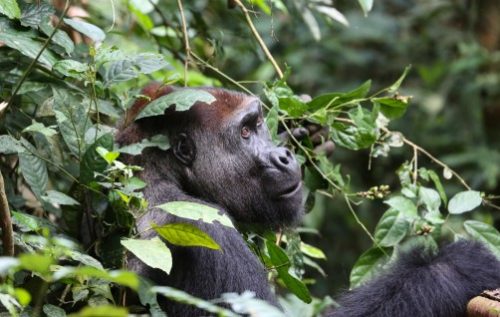 The good news: there are one third more western lowland gorillas and one tenth more central chimpanzees than previously thought.

The bad news: the vast majority of these great apes (80 percent) exist outside of protected areas, and gorilla populations are declining by 2.7 percent annually.

The WCS-led study titled “Guns, germs and trees determine density and distribution of gorillas and chimpanzees in Western Equatorial Africa” appears in the latest edition of the journal Science Advances.

The newly published paper was written by 54 co-authors from several organizations and government agencies, including WCS (Wildlife Conservation Society), WWF (World Wide Fund for Nature), Max Planck Institute for Evolutionary Anthropology, Jane Goodall Institute, Convention on International Trade in Endangered Species of Wild Fauna and Flora (CITES) – Monitoring the Illegal Killing of Elephants (MIKE), Lincoln Park Zoo, and the Universities of Stirling and Washington, and involved the protected area authorities of five countries. Researchers collected field data during foot surveys carried out over a 10-year period across the range of both western lowland gorillas (Gorilla gorilla gorilla) and central chimpanzees (Pan troglodytes troglodytes) – surveying an area of 192,000 square kilometers (72,000 square miles – equivalent to the size of the state of Washington) and including some of the most remote forests on the African continent.

The authors of the study report an estimated abundance of over 360,000 gorillas and nearly 130,000 chimpanzees across the combined ranges of both subspecies, both of which were higher than previously believed. The gorilla estimate is approximately one-third higher and the chimpanzee estimate is about one-tenth higher. These revised numbers come largely from refinements to the survey methodology, new data from areas not previously included in range-wide estimates, as well as predictions of numbers in the areas between survey sites.

“It’s great news that the forests of Western Equatorial Africa still contain hundreds of thousands of gorillas and chimpanzees, but we’re also concerned that so many of these primates are outside of protected areas and vulnerable to poachers, disease, and habitat degradation and loss,” said lead author Samantha Strindberg of WCS. “These findings can help inform national and regional management strategies that safeguard the remaining habitat, increase anti-poaching efforts, and curtail the effects of development on great apes and other wildlife.”

Although the majority of great apes were found outside of protected areas, they were still in large forested landscapes close to or bordering existing national parks and reserves and away from centers of human activity. This suggests that protecting large and intact forested areas, with protected areas at their core, is critical to conserving gorillas and chimpanzees in this region.

The data analysis also revealed a 2.7 percent annual decline in gorilla numbers, a finding that supports the continued status of the species as “Critically Endangered” on the IUCN Red List of Threatened Species. Chimpanzees are listed as “Endangered.”

The combined field time spent by researchers collecting data for the study totaled approximately 61,000 days (or 167 person-years) of time. Researchers walked more than 8,700 kilometers (5,400 miles)—a distance longer than the north-south axis of the African continent, or from New York to London—while collecting data on great ape nests that was used to generate population estimates and trends.

Said co-author Dave Morgan of the Lincoln Park Zoo and Goualougo Triangle Ape Project: “The boots on the ground research teams and partnerships are crucial to the success of these programs and the conservation of gorillas and chimpanzees. These long-term studies enable us to make informed recommendations regarding protected lands and management to help great apes.”

David Greer of WWF said: “All great apes, whether in Africa or Asia, are threatened by poaching, especially for the bushmeat trade. Our study found that apes could live in safety, and thus in higher numbers, at guarded sites than if there was no protection.”

Said Fiona Maisels of WCS: “Our study underscores the huge importance of intact forests to gorillas and chimpanzees, and of preventing illegal felling of good quality forests.”

Other conservation recommendations made by the authors include land-use planning at national scales to keep ecologically-harmful activities, such as agriculture and new road construction, away from intact forests and the protected areas that serve as important gorilla and chimpanzee refuges.

Another priority is the implementation of careful logging practices in existing logging concessions that follow Forest Stewardship Council (FSC) Standards for reducing impacts on wildlife and habitats. These standards require that access to forests is controlled, old logging roads are effectively decommissioned and effective patrol systems are put in place to prevent illegal hunting. Ensuring strong implementation is critical.

An additional threat to great apes – as well as human health – is the Ebola virus disease. Continued research into developing a vaccine and the means to deliver it are priorities, as are educational efforts on how to avoid spreading the disease and transmission between humans and great apes.

Of all the 14 living great ape taxa, western lowland gorillas and central chimpanzees have the largest remaining populations. This is certainly good news. However, their future preservation cannot be taken for granted, given the fact that their dependence on suitable habitat collides with local to global demand for natural resources from their habitat, particularly outside of protected areas, where most of them occur.

Said Hjalmar Kühl of the Max Planck Institute for Evolutionary Anthropology: “Protecting our gorillas and chimpanzees will therefore require a major increase in political will at all levels—national, regional, and global. Financial commitments from governments, international agencies for endangered species conservation and the private sector, are also critical for conserving our closest relatives and their habitats.”

Liz Williamson from the University of Stirling and the IUCN Red List Authority Coordinator for great apes said: “A combination of responsible industrial practices, conservation policies, and a network of well-managed parks and corridors would provide wildlife managers with a winning formula for conserving great apes in Central Africa. Our study has revealed that it is not too late to secure a future for gorillas and chimpanzees.”