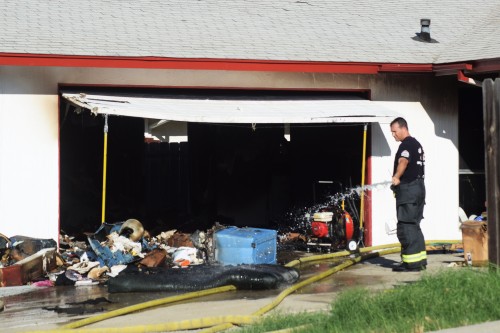 A firefighter on the scene of a structure fire in Oceanside Wednesday. Photo: Gina Yarbrough/San Diego County News

Firefighters from Oceanside and Camp Pendleton arrived at the residence, located on Siesta Drive, and began to knock down the blaze in the garage and throughout the residence.

The family inside the residence managed to escape, according to neighbors. There were no reported injuries.

The blaze may have started in the garage, a fire official says. The kitchen and living room also was heavily damaged.

Damage to the residence has been estimated at $190,000. The cause of the blaze is under investigation.