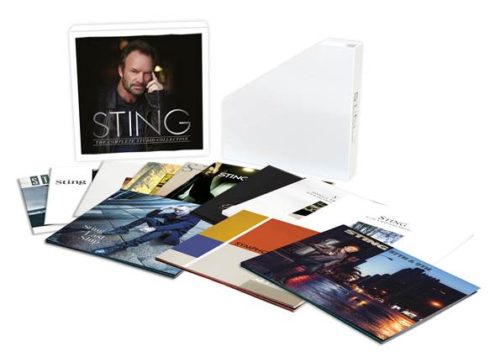 SANTA MONICA–A&M/Interscope Records and Deutsche Grammophon will release of “The Complete Studio Collection” of Sting on June 9. The collection encompasses the entirety of Sting’s illustrious solo studio album catalogue on 180 gram heavyweight vinyl – from his 1985 debut album.

“The Dream Of The Blue Turtles” through to the latest “57th and 9th” – “The Complete Studio Collection” is the first ever complete anthology of Sting’s unparalleled solo career. Following the release of the now sold out “The Studio Collection” box set via A&M/Interscope Records, “The Complete Studio Collection” includes all of the A&M/Interscope Records catalogue plus his “Deutsche Grammophon” discography – “Songs From The Labyrinth” (2006), “If On A Winter’s Night…” (2009) and “Symphonicities” (2010) – in addition to his new album “57th & 9th”; bringing together all 12 solo studio albums for the very first time.

For fans who purchased the original “The Studio Collection” box set, a separate bundle has been specially created entitled “The Studio Collection: Volume II” that contains the four newly added albums – “Songs From The Labyrinth,” “If On A Winter’s Night…,” “Symphonicities” and “57th and 9th” – with space within the set for all of the remaining albums to create “The Complete Studio Collection.”

All of the included catalogue LPs are presented in meticulous reproductions of their original artwork with new vinyl masters cut at the world-renowned Abbey Road Studios to ensure the highest possible audio quality throughout.

The album highlights the incredible full range of Sting’s seminal songwriting, inimitable storytelling, and awe-inspiring arrangements through a myriad of musical styles. From the jazz-infused politically-charged “The Dream Of The Blue Turtles” to the deft pop songcraft of …”Nothing Like The Sun,” the globetrotting “Brand New Day” to the evocative electronica of “Sacred Love,” through to the exploration of complex classical forms in “Songs From The Labyrinth,” expanding in magnitude and concept on “If On A Winter’s Night…,” and further developing into the genre-melding orchestral expanse “Symphonicities,” before finally culminating in the triumphant return to pop/rock on “57th & 9th”; the Collection showcases all facets of the ever-evolving and truly inspirational artistry of Sting.

Sting’s 57th & 9th World Tour, with special guests The Last Bandoleros and Joe Sumner, is taking the world by storm with stunningly rave reviews from fans and critics alike. The guitar-driven rock tour, featuring a four-piece band, has seen sold out performances throughout North America and Europe. Sting is currently performing across South and Central America, before venturing to Singapore, Hong Kong, Tokyo and Osaka. Sting then returns to Europe for a string of summer festival and concert dates throughout Europe. Visit www.sting.com for complete tour and ticket details.

Sting will also be awarded the 2017 Polar Music Prize, which celebrates the power and importance of music and is given to individuals, groups or institutions for international recognition of excellence in the world of music. The Polar Music Prize ceremony is on June 15 in Stockholm, Sweden in the presence of the Swedish Royal Family.