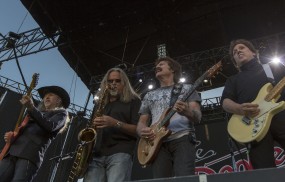 SAN FRANCISCO–Steve Miller, who moved to San Francisco over 45 years ago to launch the Steve Miller Band, played the newest venue in his adopted hometown on Friday night, rocking the America’s Cup Pavilion.

The Steve Miller Band and the Doobie Brothers played to a packed house along the waterfront at the America’s Cup Park at Piers 27/29.

With showmanship worthy of their years on stage, the Steve Miller Band and the Doobie Brothers played all their hits, leaving the stage to enthusiastic cheers from their fans.

SailSFBay’s youth outreach program is the recipient of the 50-cent per ticket charity proceeds from tonight’s show. Founded in 2008, SailSFBay is an association of Bay Area sailing individuals and organizations committed to growing participation in sailing.

The next show scheduled at the America’s Cup Pavilion is on July 18 with the Counting Crows and the Wallflowers.