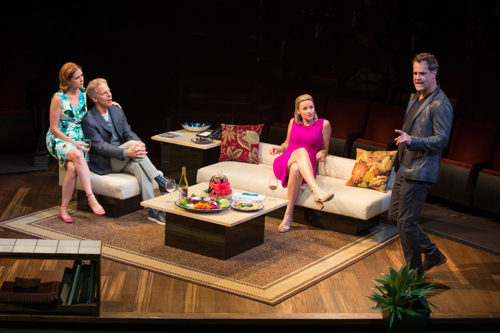 (From left) Jenna Fischer appears as Corky, Greg Germann as Norm, Alexandra Henrikson as Laura, and Josh Stamberg as Gerald in the world premiere of Steve Martin’s Meteor Shower, an adult comedy, directed by Edelstein, July 30 – Sept. 18, 2016 at The Old Globe. Photo by Jim Cox.

SAN DIEGO–The Old Globe world premiere of Steve Martin’s new play “Meteor Shower,” which finished its highly acclaimed run on Sunday, has broken multiple Globe box office records and has become one of the most successful shows in Globe history.

The adult comedy now ranks as the highest-grossing show in the theatre’s in-the-round space (which includes both the original Cassius Carter Centre Stage and the current Sheryl and Harvey White Theatre, part of the Conrad Prebys Theatre Center). It took in $862,236.50 in ticket sales, besting the previous record holder, 2015’s “Ken Ludwig’s Baskerville: A Sherlock Holmes Mystery.” “Meteor Shower,” which extended before first preview not once but twice due to popular demand, also broke Baskerville’s record for ticket sales in the White Theatre, selling 12,889 tickets throughout its celebrated run.

“Meteor Shower” now ranks second all-time in tickets sold for the in-the-round space, behind only a 1996 production of A.R. Gurney’s “Sylvia,” whose run included a considerably greater number of performances.

“Meteor Shower,” directed by Gordon Edelstein, ran at The Old Globe July 30 to September 18. It will next play Long Wharf Theatre, with whom the Globe co-produced the show’s world premiere and where Edelstein serves as Artistic Director. It will play there September 21 to October 16.

”The Globe’s continuing relationship with Steve Martin is something we cherish,” said Erna Finci Viterbi Artistic Director Barry Edelstein. “Now we can boast that not only is his work contributing to the artistic vibrancy of our theatre, but it’s contributing to our business health, as well. Most of all, Steve’s work is entertaining and delighting a huge number of San Diegans, and that’s what we’re here to do. I congratulate him on this smash hit, and I look forward to its run in New Haven, and its life beyond.”

Get ready for the unexpected when Norm and his wife Corky invite another couple to their Ojai backyard to watch a meteor shower in the night sky. As the stars come out and the conversation gets rolling, cocktails flow, tempers flare, and sparks fly—literally. Steve Martin’s surprising new comedy takes an offbeat and absurdist look at the comic anxiety lurking just beneath the surface of modern marriage.