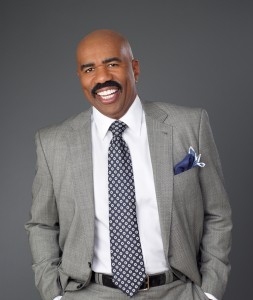 WASHINGTON, D.C. — Steve Harvey, popular national radio personality, television host and best-selling author, will be inducted into the NAB Broadcasting Hall of Fame during the NAB Show Radio Luncheon, held on April 8 in Las Vegas and sponsored by ASCAP.

“Steve Harvey entertains people of all ages with his unique and humorous perspective on life,” said NAB Executive Vice President of Radio John David. “Mr. Harvey’s dedication and talent have earned him great success, and we are thrilled to induct him into NAB’s Broadcasting Hall of Fame.”

Since 2000, “The Steve Harvey Morning Show” has provided humor, celebrity interviews, news and music to its listeners. The show, which has been syndicated by Premiere Networks since 2005, currently airs on 70 radio stations, reaching more than 6 million weekly listeners. It is also available on iHeartRadio.com and the iHeartRadio mobile app, Clear Channel’s all-in-one digital radio service.

“The Steve Harvey Morning Show” is the #1 syndicated morning show in America and #1 with African American radio listeners. The popular “Strawberry Letter” segment, in which Harvey responds to listeners’ relationship questions, led to his first book, “Act Like a Lady, Think Like a Man,” which is an international best-seller and was adapted into a major motion picture by Screen Gems.