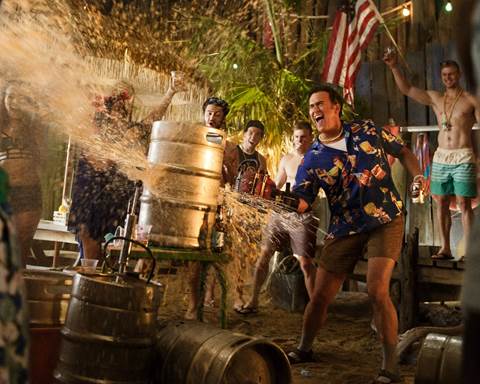 BEVERLY HILLS–Retirement from killing Deadites never looked as good as depicted in the first photo released from the set of the Starz original series “Ash vs Evil Dead.”

The show gives viewers a peek into the shenanigans Ash has been up to in Jacksonville.

The cast is led by Bruce Campbell (Evil Dead, “Burn Notice”) in the role of Ash Williams; Lucy Lawless (“Salem,” “Spartacus”) as Ruby, who now possesses the powerful Necronomicon; Ray Santiago (“Touch,” Meet the Fockers) as Pablo Simon Bolivar, Ash’s loyal sidekick dealing with the trauma he suffered in the cabin; and Dana DeLorenzo (A Very Harold & Kumar 3D Christmas) as Kelly Maxwell, who, grief-stricken after the death of her parents, plots revenge against The Evil Dead.