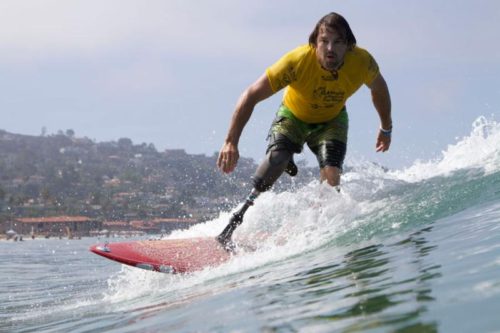 From December 8 to 11, the world’s best adaptive surfers will flock to the stunning beach break of La Jolla Shores to represent their countries and compete for individual and team medals.
Stance, an innovative, industry-leading lifestyle brand and presenting sponsor of the inaugural competition in 2015, has stepped up as the Title Sponsor – boosting their strong support of Adaptive Surfing and the ISA.
The inaugural 2015 ISA World Adaptive Surfing Championship marked a historic moment for the global growth and development of the sport as 69 surfers from 18 countries with physical challenges ranging from vision impairment to spinal cord injuries gathered for the largest international Adaptive Surfing World Championship to date. The four Gold Medallists, Mark ‘Mono’ Stewart (AUS), Bruno Hansen (DEN), Fellipe Lima (BRA) and Jesse Billauer (USA), all hailed from different continents, displaying the growing international appeal of the sport across the globe.
The Opening Ceremony of the 2016 Stance ISA World Adaptive Surfing Championship will kick off the festivities on December 8 featuring the traditional Parade of Nations and Sands of the World Ceremony at La Jolla Shores. The competition will get underway on December 9, also at La Jolla Shores, and continue until December 11 when the Gold Medalists are crowned at the Closing Ceremony.