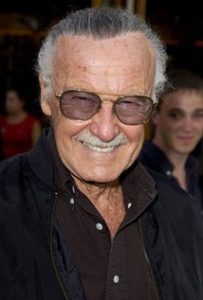 LOS ANGELES–The legendary Stan Lee, creator of Spider-Man, The Incredible Hulk, X-Men, The Avengers, Iron Man, amongst hundreds of others, has created an original new comic book titled Nitron, along with Keya Morgan and Michael Benaroya, and through Benaroya Pictures they are developing and producing a transmedia franchise around the new comic book that will see it brought to life through feature films, TV and online/digital platforms.

Details of the comic book are being closely guarded but this new Stan Lee original creation is said to revolve around a highly intelligent and advanced species of Nitronian’s who covertly live amongst us here on modern day Earth.

The comic book will serve as the source material for film, TV and digital adaptations produced by Benaroya Pictures. The company has secured an initial $50 million fund to finance the development and production of Nitron projects across multiple platforms. Benaroya is an anchor investor in the fund along with private equity sources.

Michael Benaroya, Stan Lee and Keya Morgan have written and will be producers on all Nitron content.

Nitron the comic book is being published by Benaroya Publishing, a subsidiary of Benaroya Pictures. Founded in 2009, Benaroya Publishing is a comic book and graphic novel production company dedicated to compelling storytelling and bringing fresh new ideas, and uniquely told stories to the comics literary world. The company is based in Los Angeles and launched its debut titles under the Image Comics label.

Nitron will be a six-volume series of 6 x 9–inch full-color trade paperbacks priced at $5 each. Nitron #1 will hit comic shops and digital devices in January 2017. Subsequent issues will come out on a monthly basis.

“It’s a pleasure to partner with Michael Benaroya and Keya Morgan on Nitron,” said Lee.“I am excited for everyone to explore the amazing world of NITRON with us.”

Said Michael Benaroya, “Without giving too much away, I can say that Stan has created an intricate story and mythology with characters that are unconventional yet relatable. Overall, I think Stan’s Nitron concept is fun and is new and this makes it a very exciting venture for Benaroya Pictures. Beyond entertaining lots of comic fans, we see value in comics as a great way to ignite fan enthusiasm and engagement for broader content plays. We are very pleased to not only have the opportunity now to collaborate on extraordinary content, but to do it with a truly iconic legend in Stan Lee. We look forward to going to work with Stan and Keya Morgan on this and making something discernibly unique.”

Keya Morgan added, “In a world filled with hundreds of prequels and sequels, it’s very refreshing to see a new original Stan Lee creation that is unlike anything you’ve ever seen before. It’s been a dream come true working with Stan Lee and Michael Benaroya. Stan is the greatest storyteller of all time and the billions of dollars his stories have generated at the box office is a testament to his genius. These days the big studios only care about already established film brands, while people like Michael care about art and entertainment, both new and old. I’ve spent years trying to secure financing for this project, and I’m very grateful to Michael Benaroya who is a true champion for writers, filmmakers and artists. Nitron is fascinating beyond anyone’s wildest imagination.”

Stan Lee is the most revered comic book writer, storyteller, editor, publisher, producer, and the father of the modern day superhero. Known to millions as the man whose superheroes propelled Marvel to its preeminent position in the film and comic book industry, Lee’s co-creations include Spider-Man, The Incredible Hulk, X-Men, The Avengers, Iron Man, and hundreds of others. Stan Lee currently remains Chairman Emeritus of Marvel, as well as a member of the Editorial Board of Marvel Comics.

Lee started out his career working as an office boy for the Marvel Comics, which meant fetching lunch, proofreading and refilling artist’s ink jars, eventually proving his creative talent, escalated from the position of interim editor to the president of the entire company.

Stan Lee became editor of Marvel Comics (then called Timely Comics) shortly after his service in the U.S. Army during World War II. In the 1960s Lee made Marvel into a comic powerhouse by introducing conflicted, wisecracking superheroes who were much different from comics like Superman.

Spider-Man, perhaps the most enduring of all Marvel characters, was created by Stan Lee and illustrated by artist Steve Ditko in 1962.