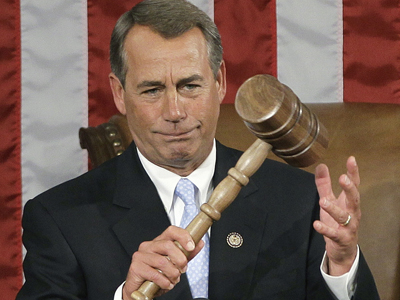 WASHINGTON – Leading political analysts on the left and the right all agree that after months and months of threatening the American people with what Georgetown University professor of sociology Michael Eric Dyson called “economic terrorism,”  U.S. House Speaker John Boehner and the Republican Tea Party Caucus in the House and U.S. Senator Ted Cruz have managed to make good on their promise when the Tea Party came into full swing after the 2010 mid-term and 2012 election to “bring the government to a halt to stop Obamacare.”

John Boehner and his House Republicans woke up Wednesday morning to a round of epically horrible press about their role in the ongoing shutdown and debt ceiling crisis. Boehner’s failure to corral his members reached a peak on Tuesday when he could not persuade them to go along with a plan to end the shutdown and avert default. The resulting reaction from the media would be enough to make any Republican weep, let alone the already tear-prone speaker.

The Washington Post described it as a “humiliating failure,” and said Boehner and his leadership colleagues had “lost all control of their majority.”

An editorial from the arch-conservative Wall Street Journal board fumed about the GOP strategy, saying that the House caucus “might as well hand the Speaker’s gavel to Senate Democratic leader Harry Reid” and urging Republicans to give up their fight.

Pat Robertson shocked America by speaking as a voice of reason to the Republican Party. The Televangelist warned they are being too extreme with their fight against Obamacare, which has led to the government shutdown, and possibly a forthcoming debt default. Robertson said in an October 15 Right Wing Watch video, “The Republicans have got to wave the white flag and say, and ‘we fought a good fight, now it’s over.'”

“They cannot shut the government down and then bring about a default. We can’t do it. It would be devastating economically to every human being and the Republicans just can’t get tarred with that,” he continued.

Whatever the outcome of today’s events and the actions of the circus of clowns on Capitol Hill who are foolish enough to put the full faith and credit of the United States in jeopardy – one thing is certain – Speaker Boehner and the Tea Party Republicans have caused irreparable damage to the U.S. image and credit worthiness in the eyes of international investors, which will hurt the nation’s ability to fully crawl out of the 2008 recession and Wall Street crash which occurred under President George W. Bush .

In addition, Speaker Boehner has caused tremendous damage to his political reputation and legacy. His character has been severely damaged by his engagement in several character flaws which inevitably leads to a failure in ultimate leadership:  The ringing convention testimony to Speaker Boehner’s demise is his inability and refusal to exert his authority to corral the radical Tea Party Caucus. Yet when a virtuoso curmudgeon such as Senator Ted Cruz (R-TX) saw that Speaker Boehner did not extolled his brand of resilience and unflappability, there was the hint and the opportunity to exploit Speaker Boehner’s weaknesses.

But character, it turned out, was a lot more complicated than Speaker Boehner’s bottom line.

Character is one of those things few people can describe but many apparently feel they can identify when they live in its presence long enough. At the end of David McCullough’s splendid biography of Harry Truman is a quote about Truman from Eric Sevareid. “I’m not sure he was right about the atomic bomb or even Korea,” said Sevareid. “But remembering him reminds people what a man in that office ought to be like. It’s character, just character. He stands like a rock in memory now.” It should be recalled that when Truman was playing poker with questionable cronies, defending influence peddlers, there were many who judged him a man of less stature.

Speaker Boehner failed to learn from the mistakes of past speakers such as Newt Gingrich and Jim Wright, both who were forced to resign their speakership post due to questionable ethics violations. All of these men, including Speaker Boehner, lacked one of the most important ingredients of leaderships and that is integrity.

A person with integrity does not have divided loyalty, nor is he one who pretends for that amounts to hypocrisy – this is the mistake Speaker Boehner fail to heed. All throughout the past two weeks members of the Republican Caucus, President Barack Obama, and the U.S. Senate did not have a clue what Speaker Boehner wanted because he was sending conflicting messages and was moving the goal post all over the field.

Integrity is described as that state of being complete, unified. Former House Speaker Tip O’Neil once stated that “when I have integrity, my words and deeds match up. I am who I am, no matter where I am or who I am with.”

Historian Thomas Bailey once wrote that Warren Harding had “a spongy interior” while George Washington had “Olympian grandeur.” Some journalists wrote after Harding was elected that he surely would be one of the great Presidents. And one wonders what they might have said about the early Washington, who read little but tracts on manure and animal husbandry. Tricky business, this character assessment.

Like it or not, we are launched on a season of character analysis. Certainly in this business of judging a potential President or House Speaker there is a general standard, though vague, of decency, intelligence, honesty and courage that the person must have. But watch out after that. There is a portion of the character of any House Speaker or President, never glimpsed before, that emerges under the pressures of his office. How was it that Lyndon Johnson, a man of monumental talents and passions, became a captive in Vietnam of military leaders he had distrusted and scorned for 30 years in public life?

Among the convention patriarchs was historian Arthur Schlesinger, Jr. He had a 50-year rearview mirror. Maybe, he suggested, politicians have different shades of character for the different dimensions of their lives. He takes his text from the election of 1884 between Grover Cleveland and James G. Blaine. Cleveland, who had fathered an illegitimate child but had also been an effective and upright mayor of Buffalo and Governor of New York beat Blaine, the Speaker of the U.S. House and later a Senator from Maine, who was a true family man but was involved in numerous railroad finance scams. Schlesinger recalled the counsel of one wit from that era. “Since Cleveland’s public character was exemplary and his private character questionable, and Blaine’s private character was spotless but his public character corrupt,” said Schlesinger, “it was suggested in an editorial that Cleveland should be put in public life and Blaine consigned to private life.”

The bottom line is simply this – the present financial debacle is the result of a manufactured crisis initiated by the Tea Party and outside organizations sympathetic to their cause, which could have been prevented but due to the failure and the absence thereof of leadership and integrity from Speaker Boehner – we are where we are.