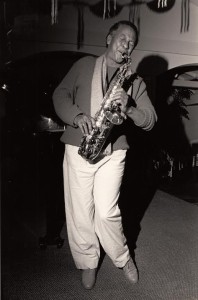 Morgan fell hard into heroin and got to be almost as good a conman and thief as he was a musician in order to feed his habit. The habit cost him 30 years of his life in and out of prison, most of it at San Quentin, where he performed in a big band with fellow junkie jazz musicians that grew famous in the Bay Area. To bring the past into present, director NC Heikin and writer Michael Connelly (The Lincoln Lawyer) brought an all-star band together into the “Q” for a concert.  This hyper-emotional event forms the backbone of this riveting film.

Filmmaker NC Heikin began her career at La Mama Experimental Theatre Club in New York and went on to work on and off Broadway as an actress, singer and director. She has written screenplays for Disney and Paramount as well as French TV networks. In 2004, she made her directing debut with her prize-winning short, mañana. Her first documentary, “Kimjongilia,” about North Korean refugees, premiered at Sundance, won the One World Brussels Best Film 2010, and has been seen all over the world. Heikin’s stage play, “Late,” is in casting for a premiere in Paris next season.

Michael Connelly is the bestselling author of twenty-eight novels and one work of nonfiction. With over sixty million copies of his books sold worldwide and translated into thirty-nine foreign languages, he is one of the most successful writers working today. A former newspaper reporter who worked the crime beat at the Los Angeles Times and the Fort Lauderdale Sun-Sentinel, Connelly has won numerous awards for his journalism and his fiction.  His very first novel, The Black Echo, won the prestigious Mystery Writers of America Edgar Award for Best First Novel in 1992.  In 2002, Clint Eastwood directed and starred in the movie adaptation of Connelly’s 1998 novel, Blood Work. In March 2011, the movie adaptation of his #1 bestselling novel, The “Lincoln Lawyer,” hit theaters worldwide starring Matthew McConaughey as Mickey Haller. His most recent #1 New York Times bestsellers include The Crossing, The Burning Room, The Gods of Guilt, The Black Box, and The Drop. Michael is the executive producer of “Bosch, an Amazon Studios original drama series based on his bestselling character Harry Bosch, starring Titus Welliver. He is also the executive producer of “Sound Of Redemption: The Frank Morgan Story.”