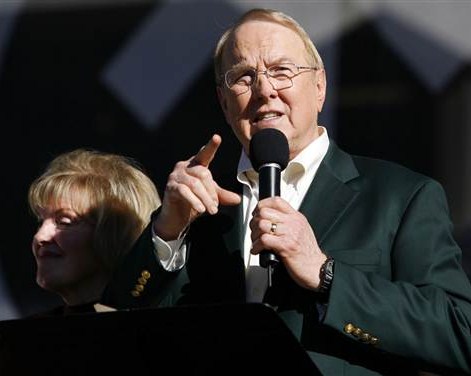 Tony Perkins, head of the Family Research Council, and Dr. James Dobson, founder and chair emeritus of Focus on the Family, held a conference call with other leading evangelicals two days after President Obama’s May 9, 2012 announcement in support of same sex marriages, to strategize the organizations one clear statement on the issue. In addition, the group of men sent emails and made phone calls to Governor Romney’s campaign demanding that Governor Romney prepare major remarks to counteract the president’s action, and to solidify and clarify his [Governor Romney] stand on the issue.

Instead of a rapid response and coordination which was the norms in President George W. Bush’s administration on such issues, evangelicals were disappointed that Governor Romney only presented short lukewarm responses to hot button social issues that failed to satisfy the expectations of the evangelical elites.

Governor Romney’s chances in November depend heavily on whether evangelicals like Dr. Dobson and Tony Perkins proves to be a weather vane for one of the country’s most important voting blocs. Millions of white evangelicals returned to their roots to elect one of their own, Jimmy Carter, in 1976. They changed allegiance again in 1980, helping to give Ronald Reagan and George H.W. Bush large majorities. Another big push came in 2004, which propelled George W. Bush and Dick Cheney back into the White House.

However, this year there is some wavering among the faithful. One reason is major disappointment with Governor Romney. Another is the Republican Party establishment does not want to discuss publicly the same sex marriage issue because it feels it will alienate voters and distract from the economic status of Americans – which the Party feels is their winning issue.

“No way,” said Traditional Values Coalition (TVC) president Andrea Lafferty, who has become a religious-right activist as head of the TVC. She has plenty of company among fellow comparable organizations such as Ralph Reeds’ Faith and Freedom Coalitions, clergymen—even those who shun direct political involvement.

“This isn’t exactly a bold move [support for same sex marriages] by the president. Forced by Joe Biden’s big mouth, Obama had no choice left but to publicly embrace an agenda he has privately promoted for years,” stated TVC president Lafferty. “I’ve been saying this for the last four years. Obama has always been in favor of homosexual marriages, but was forced to keep his enthusiasm at a distance for fear of offending the American public.”

Rev. Scott Sheets, pastor of West Virginia’s Hedgesville Baptist Church, has misgivings on supporting Governor Romney for president: “To vote for a person just because he appears to be the Republican nominee and has a tardy track record on social issues, is a mistake.

“Governor Romney has yet to convince me that he truly shares my values and interests,” stated Sheets.

Sheets wants a president “who will fight for our rights” against pro-choice feminists, atheists, gay-rights activists and others who threaten his brand of morality.

“We’re getting Obamacare and same sex marriage stuff shoved up our noses, while the Republican establishment is tip-toeing on thin ice trying not to offend key constituencies,” Sheets complained.

To protect their evangelical support, the Republicans must stoke the anger of people like Sheets. Democrats have nearly conceded that getting support from majority of white evangelicals is wishful thinking – since 97% of them voted for John McCain/Sarah Palin in 2008 anyway.

Republicans must convince evangelicals that the Democrats are not only liberal but have failed to protect the “traditional values” they hold dear. The stakes in this religious tug-of-war are high: The Southern Baptist Convention alone boasts 16 million members. Four years ago, the white evangelical vote was nearly 32% of the electorate.

The New Right Alliance that emerged between religious and secular conservatives in the late 1970s helped Reagan attract two-thirds of the white evangelical vote, the same proportion Carter had won in 1980. Some 70% voted for George W. Bush in 2004, giving him a lock on the South, where white Protestants are the dominant voting bloc, and strengthen him in important Northern states like Illinois and Michigan.

Then of course – the economic meltdown came in 2008-2009, which provided an opening for Senator Obama to ride into the White House on the message of “hope” and “change.” 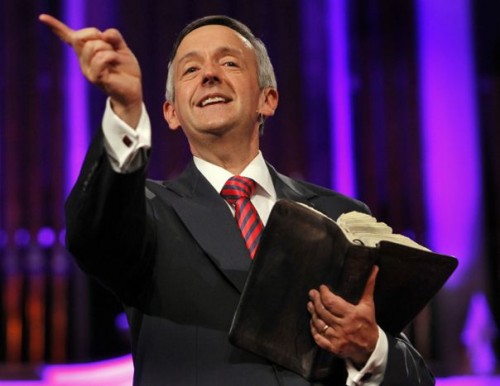 Dallas Baptist Minister, Dr. Robert Jeffress, has called the Mormon faith a cult and will not support Governor Mitt Romney to be president.

Flash forward to July 2012, after bruising Republican primary races later, Governor Romney still does not have an undisputed claim to evangelical support this year. Spokesperson for the Southern Baptist Convention, the country’s largest Protestant group, complains that Governor Romney is squishy on certain issues. In particular, they disdain his reluctance to hammer gay-rights activism as some other Republicans do.

Dr. Richard Land, head of the group’s Ethics and Religious Liberty Commission, warns, “It will take clear differences on values to get Southern Baptists to not support Governor Romney and his fort-coming VP nominee. If you want to energize Southern Baptists, it doesn’t take a rocket scientist to figure out how.”

One way the Republican National Committee is reaching out to evangelicals is by making Governor Romney more accessible to the Religious Right media.

This past May, Governor Romney gave the commencement address to Jerry Farwell’s Liberty University in Virginia in which he stated his support for “marriage between one man and one woman,” ironically it was the only standing ovation he received during his 25 minutes presentation. Governor Romney was scheduled to be the keynote speakers at the Southern Baptist Convention’s June 12-19, 2012 annual conference, which was held in New Orleans, in which he was expected to elaborate in more detail his position on his opposition to same sex marriage. However, for reasons Governor Romney’s camp refused to divulge – Governor Romney canceled out.

For many evangelicals, the Mormon Faith — that faith — is a “false religion,” as the Dallas Baptist pastor Robert Jeffress called it — raises serious doubts about Governor Romney’s suitability for office. However, such concerns ultimately say more about the insecurities of the establishment denominations than about Mormonism itself.

Many evangelicals assert that Mormonism denies the divinity of Christ and is therefore not a branch of Christianity. Nevertheless, the Mormon belief is that Jesus was the first-born child of God and a woman, and that humans can aspire to share his spiritual essence in the afterlife.

What’s more, if a belief in Christ’s divinity were used as a test of our politicians, many past American leaders would fail abysmally. Most of the founding fathers — including Thomas Jefferson, George Washington, Benjamin Franklin and Thomas Paine — endorsed deism, which sees Jesus as a very good human being, not part of the godhead.

The real issue for many evangelicals is not just Governor Romney’s position on same sex marriage — but Mormonism’s remarkable success and rapid expansion. It is estimated to have missionaries in 162 countries and a global membership of some 14 million; it is also, from its base in the American West, making inroads into Hispanic communities. Put simply, the Baptists and Methodists, while still ahead of the Mormons numerically, are feeling the heat of competition from Joseph Smith’s tireless progeny.

Some evangelical leaders take this a step further to accuse Governor Romney of vaguely conspiratorial motives. The Baptist minister R. Philip Roberts, author of “Mormonism Unmasked,” recently said that evangelicals are concerned not about, Governor Romney promoting his faith as president, but about the great boost a Mormon presidency would give to the church’s proselytizing efforts.

Rev. Robison James, a religion professor at the Baptist-affiliated University of Richmond, thinks that at least some in his denomination are losing their pro-Republican fire out of frustration; the Reagan-Bush era and the George W. Bush/Dick Cheney era, after all, did not re-create society in their image. Thus, James predicts that Governor Romney could get close to half the white evangelical vote, rather than the large chunk that propel Bush/Cheney back into office in 2004.

Rev. James stated, “Governor Romney will need to satisfy the Republican Right at the August Republican Convention in Tampa by allowing the Republican platform to have statements inserted supporting a Marriage Amendment to the U.S. Constitution, which states that marriage is to be between one man and one woman and is the law of the land.”

James and other influential social conservatives have stated that they will “hold the convention hostage” if there is no agreement on placing in the Republican platform a repeal of Obamacare, unfettered support for Israel, prosecution and expulsion of all illegal immigrants, and an amendment to the U.S. Constitution calling for annual federal balance budgets.

“If Governor Romney doesn’t do the things we are calling for – he can kiss the evangelical vote goodbye,” James stated.