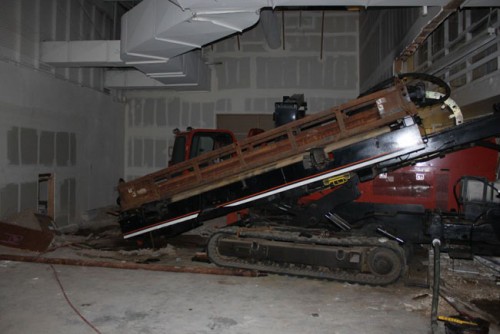 The discovery came after a hazardous materials unit from the city of Calexico responded to reports of a possible gas leak at the former Vons store on West 2nd Street. When the team attempted to enter the shuttered building, they spotted a massive piece of drilling equipment parked inside. Local authorities alerted ICE HSI agents, who secured the scene and informed their law enforcement counterparts in Mexico. HSI agents subsequently obtained a federal search warrant authorizing them to enter to the vacant building.

HSI investigators estimate the 4-inch diameter tunnel extends approximately 100 yards from the vacant supermarket, but it had not yet reached Mexico. The use of pipeline-style tunnels is one of the newest approaches being employed by drug smuggling organizations. The narrow passages are lined with PVC pipe and the drugs are smuggled through.

So far, no arrests have been made, but ICE HSI agents underscore the investigation is ongoing.

“This discovery again shows the Mexican cartels’ growing desperation in the face of heightened border security,” said Ricardo Sandoval, assistant special agent in charge for ICE HSI in El Centro, Calif. “Frustrated by our defenses, they’re literally going underground, but we’re thwarting them there as well. That’s owing to the extraordinary ongoing enforcement efforts involving the agencies here and in Mexico.”

In the last four years, authorities have uncovered more than 10 smuggling tunnels in the area around Calexico and the neighboring city of Mexicali, Mexico.