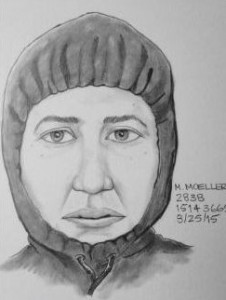 SAN DIEGO–Crime Stoppers and investigators from the Alpine Sheriff’s Station are asking for assistance from the public to help identify and locate two unknown suspects wanted for annoying and harassing a child.

The incident happened on Monday around noon in the 2000 block of Arnold Way. A ten-year-old girl was playing outside an apartment complex when a white van with two men approached her. One of the men got out of the van and asked the girl if she wanted a ride. He then asked her if she wanted candy and said he had some in the van. The second suspect, the passenger, stayed in the van. The ten-year-old girl was able to run away and hide in some bushes. Her parents were notified.

Deputies from the Alpine Sheriff’s Station responded and the investigation is ongoing.

The suspect is described as a white male adult with freckles on his face, wearing a black hooded sweatshirt with the drawstring pulled tightly around his face and black sweatpants.

The suspects’ vehicle is described as a white minivan with tinted windows down the sides, a pink breast cancer sticker on the back door and two pieces of lumber on top of the van.

Detectives are asking anyone with information on this case to call the Sheriff’s Department’s non-emergency line at (858) 565-5200. If you’d like to remain anonymous, call the Crime Stoppers anonymous tip line at (888) 580-8477. Crime Stoppers is offering up to a $1,000 reward to anyone with information that leads to an arrest in this case. Anonymous email and text messages can be sent via www.sdcrimestoppers.org.