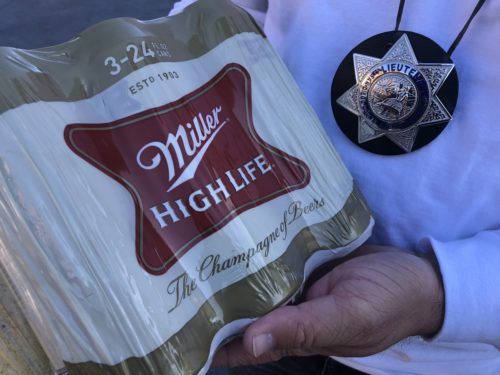 A plain clothes deputy entered a licensed establishment and acted obviously intoxicated. She smelled of alcohol, stumbled into the store, slurred her speech, dropped items, bumped into displays, etc. She then tried to purchase alcohol.

It is a misdemeanor in California to sell alcohol to someone who is obviously drunk. If the clerk sold the plain clothes deputy alcohol, deputies and ABC agents entered the store to explain why the decoy shouldn’t have been sold alcohol.

Of the eight locations visited, five sold to the decoy. The operation, conducted from 11 a.m. to 4 p.m., is for educational purposes only and no enforcement action will be taken. This operation is part of a $100,000 grant from ABC.

So far in 2018, Sheriff’s Deputies have arrested nearly 1,000 people for driving under the influence of alcohol or drugs.

The operation is aimed at keeping impaired drivers from roadways and preventing crashes that can cause serious injury or death.