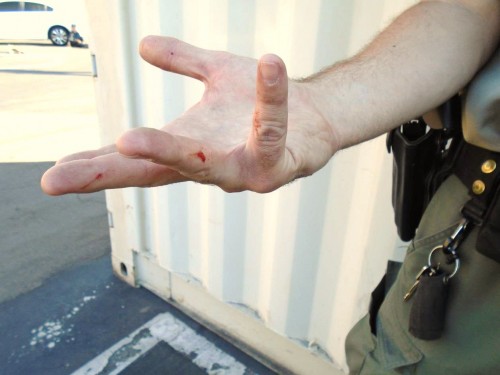 SAN DIEGO–San Diego County Sheriff Bill Gore says his department will investigate the actions of a deputy who used a taser to restrain a 13 year-old male runaway in a parking lot at grocery store in Fallbrook on Saturday.

At a news conference this morning at Sheriff’s Department headquarters in San Diego, Sheriff Gore answered questions from the media regarding the incident which was recorded by an onlooker with their cell phone. The video, posted on YouTube, shows the deputy restraining the juvenile on the ground while witnesses are heard in the background shouting profanities at the deputy.

The sheriff said the deputy’s actions in detaining the juvenile was “appropriate and I think our deputy acted accordingly.”

On June 12, Sheriff’s department received a call that a 13-year-old was reported missing from his home in Fallbrook. The report indicated that it “was the fifth time the juvenile ran away from home.”

On June 13, after meeting with the juvenile’s mother, Deputy Jeremy Banks checked an area behind a business located at 1133 South Mission Avenue and found the juvenile. Deputy Banks contacted the juvenile and made repeated requests for the juvenile to go with him so the deputy could take him home to his mother, but the juvenile refused. Deputy Banks then attempted to take the juvenile into custody, but there was a struggle. During the struggle, the juvenile bit the deputy on the forearm. In an attempt to take control of the juvenile, the deputy deployed his taser. After the arrest, the juvenile was taken to a hospital, treated and released to Juvenile Hall. The deputy was also seen by a doctor for the bite wound and other injuries sustained during the encounter.

Gore said the deputy ask repeatedly to the juvenile “let’s go home.” He said that’s when the incident escalated.

“When you see the video the juvenile is struggling on the ground. He’s not obeying commands. He’s wrestling with the deputy. The deputy tries to restrain him that’s when he bites the deputy’s forearm…that’s when the deputy deployed his taser,” Gore said.

The sheriff refuted claims by witnesses at the scene that the deputy used a chokehold on the teen during the struggle.

“It is important to note the video you are seeing online is on a loop. The deputy’s interaction with the juvenile did not last as long as portrayed in the video. There was no chokehold or carotid restraint. If there was, the juvenile would not have been able to bite the deputy or continue to struggle,” Gore responding to the cell phone video posted on You Tube. “He was wrestling with the deputy instead of just getting in the car to go home to his mother.”

According to the Sheriff’s department statement, the deputy was “by himself with six other people in the area” and called for backup during the struggle. 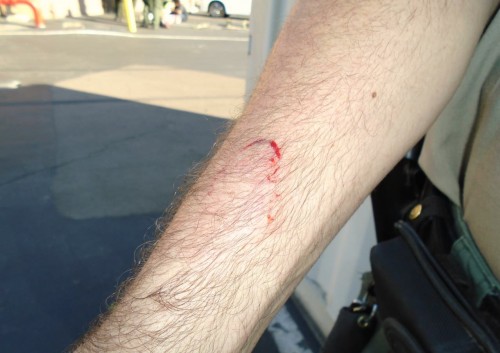 Gore says there is no dashcam or body camera video of the incident. After the arrest, deputies who responded for backup asked witnesses if they recorded the incident on video. A witness presented the deputy with a cell phone video. The deputy then took a recording of the cell phone video which is now in evidence.

Gore says the attempted by deputies to erase witnesses’ cell phone videos was not true.

“There was no attempt to erase any cell phone video,” Gore said. He added, “We take these matters very seriously and every use of force is thoroughly investigated. We have an obligation to return the missing juvenile to his family. Any father or mother out there would want us take missing person reports seriously.”

Gore says the mother of the teen was relieved her son was found and apologized for her son’s behavior. The teen is facing felony charges of resisting arrest with injury to a deputy.

Deputy Banks, an eight-year veteran of the Sheriff’s Department, remains on duty, according to the sheriff.

“The deputy is off today and has not been assigned desk duty,” he said.

Because of the juvenile’s age, the Sheriff’s department will not release the name of the teen.