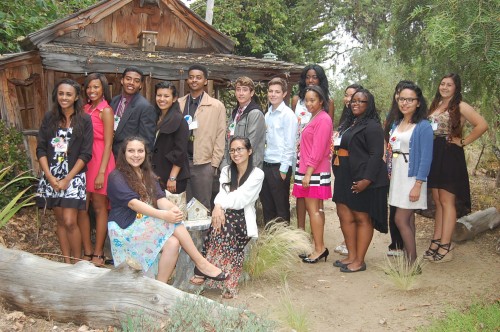 Many of these young people will be the first in their families to attend college. Oceanside High graduate Will Tate is one. A blend of African-American, Mexican and Phillipino, Tate is bright, charming and charismatic. He was a member of the National Honor Society for three years and graduated with a 3.9 GPA. In addition, he was captain of the wrestling team and active in the Fellowship of Christian Athletics. He spent hundreds of hours in a multitude of volunteer capacities, including 180 hours as a Counselor-in-Training with the Boys and Girls Club of America. Accepted by every university to which he applied, Tate plans a double major in Business and Accounting. Ultimate goal? Motivational speaker geared to encouraging young people to set and achieve their goals no matter the hardships they may face.

Two of the aspiring college attendees face major medical hurdles. Oceanside High graduate Nubia Castro, a non-English speaking immigrant from Mexico at age 12, has endured numerous hip and spinal surgeries due to Scoliosis, and has a metal plate in her spine. In spite of pain so intense that at times lengthy bed rest is required, she managed to teach herself English and graduate with an impressive 4.19 GPA. She will enter California State University San Marcos as a pre-med student and plans to become a Pediatrician. That is just for starters!

Brandon Facon suffers from Crohn’s Disease, an inflammatory bowel disease that may affect any part of the gastrointestinal tract. It is a chronic inflammatory disorder in which the immune system continuously attacks the gastrointestinal tract. Just nine short months ago, Brandon’s medical condition was so critical that he had to undergo liver transplant surgery. He was uncertain of his chances of survival, yet hopeful. One would never have guessed from his winning smile, positive attitude, strong faith, and an absolute belief in his ability to attain success. This fall, Brandon will enter California Polytechnic State University and begin working toward a degree in Industrial Engineering.

Elizabeth Johnson was challenged by ADD and severe depression. Unable to function sufficiently in the public school system, she was transferred to Ocean Shores, an alternative school for students with severe life challenges. During her high school years Elizabeth became active in her community by volunteering at her church; the Vista Entertainment Center; Peer Leaders Uniting Students (PLUS) and the Gay-Straight Alliance (GSA). Elizabeth will begin her trek toward a management career in the hospitality industry this fall at Mira Costa College. She hopes to transition to Johnson and Wales University in Denver, Colorado for her undergraduate degree.

Each of the seventeen scholarship recipients has a unique, inspiring story. In spite of fractured families for some, financial hardships and major medical issues, they share an absolute belief that they can achieve. Their mothers received the greatest amount of credit, followed by fathers and other family members and a teacher who believed in them. Church-inspired faith was also high on the list. While few in numbers, these young people are representative of the quality of education offered students in North San Diego County schools.

The garden reception was held on the beautiful grounds of the Oceanside home of Stephen and Janet Bledsoe Lacy. The setting was almost whimsical, with a secret garden, hundreds of tiny white lights throughout, a wood gazebo, stone paths and an arboretum, all nestled perfectly among dozens of trees and plants and beautiful, sweetly fragrant flowers. The view of Oceanside was magnificent, especially as darkness settled. There was an abundance of great foods, fresh fruits and vegetables and delectable desserts and pastries; fine wines, beer and sodas. The vocal group “NICE” serenaded the guests with smooth, soulful music.

The Martin Luther King, Jr, scholarship program was established by the Oceanside Housing Commission to honor and assist high-achieving, college-bound students from North County schools. Current Housing Commission members include Jackie Camp, Geri Cooper, Allison James, Robert Mikulay, Wanda Jean Moore, Joanne Sorensen and Inez Williams. The scholarships are funded by local politicians, citizens, businesses, attorneys, physicians, retired military and such organizations as the Oceanside Teachers’ Association; OUSD Administrators’ Association; Oceanside Chamber of Commerce; North County NAACP; San Luis Rey Rotary; Oceanside Civitan; Involved Men of Oceanside, and the North County African-American Women’s Association. Over its 22-year history, donations have grown from a total of $1,500 the first year to $36,000 this year in scholarships alone. It is estimated that more than half-a-million dollars has been donated since the program’s inception. The Lacys have hosted the event from the beginning.