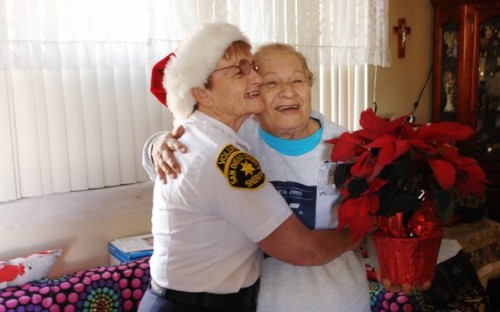 SVP member Marie Allin gets a hug from Roza as she hands her some holiday gifts. Courtesy photo

POWAY–Living alone since her husband’s passing, Dorothy does not get out much. Her family lives in the next county so she doesn’t see them much either. That’s why she is one of the holiday cheer stops for the Sheriff’s Senior Volunteer Patrol (SVP) in Poway on Tuesday.

“Thank you, I wasn’t expecting this,” she tells SVP member Marie Allin, who offers her a poinsettia plant, a cookie tin and a little gift bag of goodies. In return, Marie gets a hug and a huge smile from Dorothy.

Dorothy, 80, has been in the program for less than a year. Allin asks her if she can visit with her briefly and makes casual conversation with her. Dorothy tells her she plans to spend Christmas Eve with her family and tells her she spent Thanksgiving with them as well.

Allin, who helped coordinate this year’s holiday gift delivery, says they have been doing cheerful gift deliveries to the people signed up in the You Are Not Alone (YANA) program in Poway for more than 10 years.

“This is the time of year when they sometimes get depressed,” says Allin. “We have one person with a caregiver and one couple, otherwise all the others in our program are alone.”

Earlier, Allin and other members of the SVP gathered in the Poway Sheriff’s conference room to assemble the goodies for the 11 people in their YANA program. Wearing festive hats, sweaters and bejeweled T-shirts, the four women divided the work. Liz Shade tied big glittery bows to the cookie tins. Nancee Prast and Ginny Seipel discussed which gifts go to which senior.

One lady really loves teddy bears so she gets one of those, Prast said. Another lady is bedridden so she gets a cup with a cozy on it that holds handy items like lotion and a nail file that she can grab from her bed.

Each person will receive a potted poinsettia, gift cards for Coco’s and for groceries, postage stamps, notecards, hand lotions and a tin of cookies. The items are all donated, either directly or purchased with donated funds, says Allin.

The SVP is not allowed to solicit donations but people hear about the holiday gift baskets for the YANA people, and they all want to help. Prast says they already have a group of women who want to knit hats, slippers, scarves or mittens for next year.

“We try to come up with something new every year,” says Allin.

Last year, the SVP members made ribbon trees for everyone. One of thos trees was displayed in a senior’s home as Allin continued her morning visits. Roza’s caregiver let Allin inside and she was immediately greeted by Roza with a hug.

“I love you, I love you,” Roza, 81, tells Allin. The SVP comes to see her twice a week. Roza has been in the program for several years now.

“We’re thinking of you and you have a merry Christmas,” Allin says to Roza after chatting with her for a little while.

Allin says Dorothy is lucky that her family spends time with her. Sometimes, families live too far away or don’t want to spend time with their older family members, and sometimes there is no family to visit them.

The SVP used to have a bigger group of seniors to visit, but in the past few years, some have passed away, some have moved and some have gone into skilled nursing facilities, she says.

Anyone who is homebound can apply to be in the program. Some younger people might have medical issues that keep them from going out.

The SVP is checking that people are eating, that they have decent living conditions and that no one is hurting them or abusing them. Members also watch for signs of depression and self-neglect. People often give clues by saying things such as “No one cares anyway.” SVP members will make note and refer a psychiatric response team to check up on them.

Allin says they have found people who have fallen and hurt themselves. If not for the visits, some of these people might not have had help for some time, she says.

Sheriff SVP groups plan to give out holiday baskets in some of their other areas throughout the month.