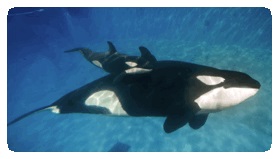 SAN DIEGO–SeaWorld is making new changes to its theme parks. The zoological organization has announced Thursday that it will end its breeding program of the orca killer whales.

Marine park officials also will cease its controversial theatrical performances of the killer whales with their trainers.

SeaWorld has formed a partnership with the Humane Society of the United States (HSUS) to focus on preserving and protecting wild animals and the places they live.

“Our goal at San Diego Humane Society is to inspire compassion and end animal suffering, so today’s announcement regarding the end to orca breeding by SeaWorld is a game changer worthy of praise and celebration,” said Dr. Gary Weitzman, president and CEO for San Diego Humane Society. “We have always been proud of the conservation and rescue work SeaWorld conducts here in San Diego but the orca controversy has overshadowed those important efforts in our region. We congratulate The Humane Society of the United States and SeaWorld in arriving at this incredible agreement which will help set the tone for the humane treatment of animals worldwide.”

The killer whales at San Diego SeaWorld will remain at the marine park.

People for the Ethical Treatment of Animals (PETA), an animal rights organization, have been critical of SeaWorld’s treatment of the orcas. The group has led numerous rallies demanding the marine park release the orcas back into the ocean.

The organization released a statement on SeaWorld’s decision to end the breeding of the orcas:

PETA has campaigned hard and today there is a payoff for future generations of orcas. For decades orcas, dolphins, beluga whales, seals and many other animals have suffered in SeaWorld confinement, and to do right by them now, SeaWorld must open the tanks to ocean sanctuaries so that these long-suffering animals may have some semblance of a life outside their prison tanks. SeaWorld has taken a step forward but more must come. PETA urges kind people everywhere to keep campaigning strong.

The Humane Society of the United States and SeaWorld will work together as advocates and educators for the ocean and its animals.

Their mission will include:

SeaWorld and HSUS will continue to look for additional opportunities for strategic collaboration, to grow their efforts to advocate for ocean preservation and conservation and the humane treatment of animals.