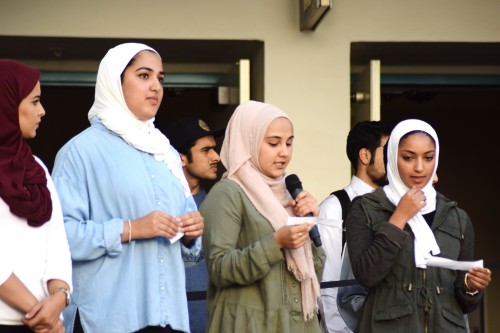 SAN DIEGO–San Diego State University students united with the San Diego chapter of the Council on American-Islamic Relations at rally Monday afternoon to denounce Islamophobia on the campus.

The rally, held at Hepner Hall, was in response to the November 19 attack on a female Muslim student at Parking Lot E on campus by a unknown male assailant. According to the student, the man pushed her and pulled her headscarf off while making hate-related comments to her.

SDSU’s Muslim Student Association members and CAIR officials have called on school administrators and San Diego community to end Islamphobia and bigotry in the city.

Muslim students blame the attack on the growing anti-Muslim rhetoric across the nation, and calling to end this trend.

“We would like to put an end to any Islamophobic rhetoric used by the administration or faculty in classroom environments,” said Ahmed Buzeriba, president of SDSU’s Muslim Student Association. 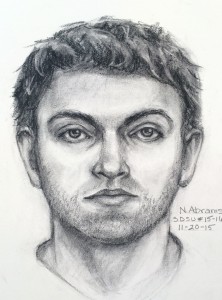 Buzeriba added that he was pleased with the outpouring of support at the rally from SDSU students and the community.

“The event today was beautiful. It was so nice to see our community come and stand in support of the Muslim girl who was attacked on Thursday,” Buzeriba said.

Fayaz Nawbi, a student at SDSU, and member of CAIR San Diego, expressed optimism at the rally.

“I know that San Diego State University and its students believe in this thing called diversity, and we are a people that stand united against any hatred or bigotry aimed towards any ethnic or minority group,” Nawbi said.

The Muslim Student Association are asking SDSU administration to address and eliminate “systems of oppression” that targets people of color on campus. They also want students to create an environment that accepts all religions, ethnicities and cultures.

Hanif Mohebi, executive director of CAIR-San Diego, says safety and security on campus should be addressed by school officials and campus police.

“I think it needs to be updated,” Mohebi says. “When I speak to the students they tell me they don’t feel safe. So we need to make sure that we provide safety and security for our students.”

Mohebi is asking individuals with knowledge of the assault on the Muslim student to come forward and contact police.

“I really encourage everyone who can recognize that photo to come forward because we truly need people to help us solve this case.”

Authorities released a sketch of the suspect. He is described as a white male in his 20’s with a thin build, black-haired, 5 feet, 11 inches tall with green or hazel eyes.

The case is being investigated as a hate crime.