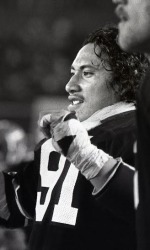 Friday’s game is set to kickoff at 7:30 p.m. at Qualcomm Stadium, with the five Aztec greats being recognized during halftime.

The Aztec Hall of Fame inducted its first members in 1988, and welcomed a new group of legends every year through 1999. Inductions were put on hold for two years while work was completed on the Aztec Athletics Center (now Fowler Athletics Center), which is the first permanent home of the Hall of Fame, and resumed in 2002. Not including this year’s class, 133 individuals have been inducted since its inception.