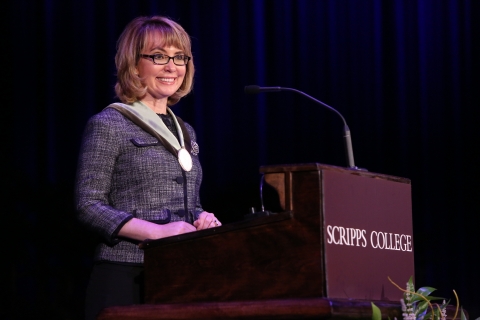 CLAREMONT, Calif.–(Businesswire)–Former U.S. Rep. Gabrielle Giffords ’93 was honored today at Scripps College by being the third recipient of the Ellen Browning Scripps Medal, the College’s highest level of recognition.

“It’s humbling to receive this award from my alma mater and to join the company of two inspiring women leaders who have been honored previously,” said Giffords. “Ellen Browning Scripps embodied values that I try to live by today: public service, helping other women, and having the courage to stand up for what’s right.”

The medal, named after the school’s founder, has been given only twice: to first lady Hillary Rodham Clinton in 1994 and former U.S. Supreme Court Justice Sandra Day O’Connor in 1998.

“Our community joined together today in celebration of Gabrielle Giffords and all she has accomplished on behalf of women, civil discourse and our country. Her leadership brings people together,” said Scripps College President Lori Bettison-Varga. “Today was a historic day for Scripps College as we honored Gabby with a medal that represents the confidence, courage and hope of our founder, Ellen Browning Scripps, who advanced opportunities for others throughout her life.”

Giffords is known nationwide for her consensus-building leadership in Congress and resilience in the face of violence. Giffords was shot in the head at a Congress “On Your Corner” event in Tucson in January 2011. Resigning from Congress one year later, Giffords said, “I will return, and we will work together for Arizona and this great country.”

She was the youngest woman elected to the Arizona State Senate, where she served from 2000-2005, and later in Congress from 2006-2012. She credits her success to her values of kindness, candor and hard work. She has fought for legislation to help working families, improve U.S. security and advance education.

Giffords gave a powerful 2009 Commencement talk at Scripps on the importance of public service and living a life of integrity, saying: “The safety of the world depends on your saying ‘no’ to inhumane ideas. Standing up for one’s own integrity makes you no friends… yet defiance of the mob, in the service of that which is right, is one of the highest expressions of courage I know.”

In early 2013, Giffords and her husband, Mark Kelly, retired Navy Captain and NASA astronaut formed Americans for Responsible Solutions — its aim is to encourage elected officials to stand up for solutions to prevent gun violence and protect responsible gun ownership by communicating directly with the constituents who elect them.

After graduating from Scripps, Giffords spent a year in Mexico as a Fulbright recipient and went on to earn a master’s degree in regional planning from Cornell University.

The College awards the Ellen Browning Scripps Medal to women whose pioneering accomplishments make a significant difference in the life opportunities of other women. A reporter, suffragist and philanthropist, Ellen Browning Scripps founded Scripps College in 1926 to develop students who can “live more confidently, courageously, and hopefully.”